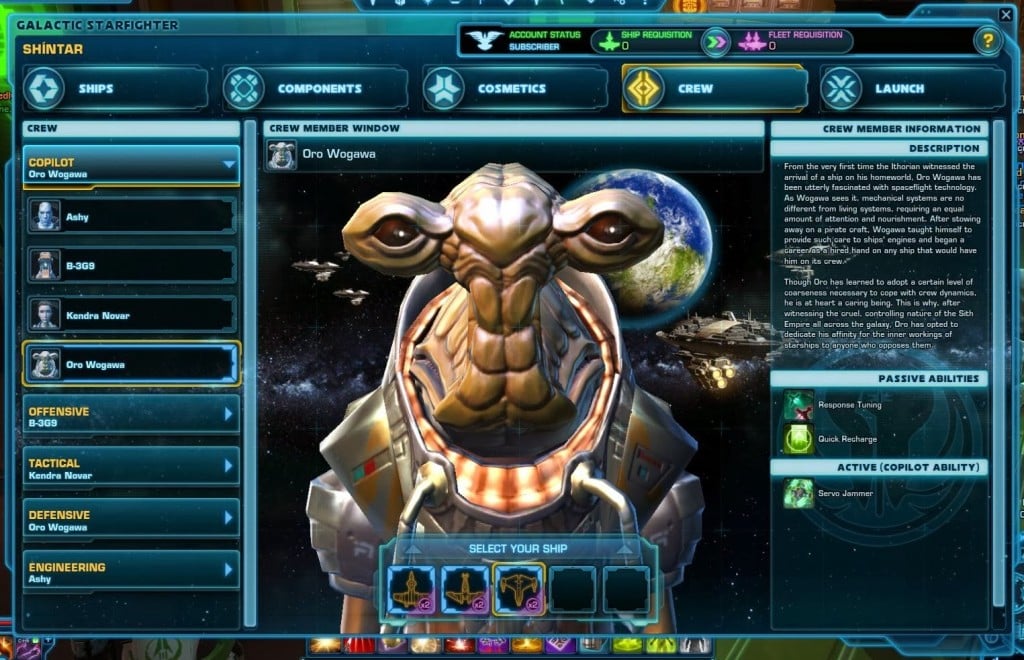 Companions play an important role in Star Wars: The Old Republic and they do make the game more enjoyable. This guide focuses on the default companions assigned specifically to fill the crew positions for the Galactic Starfighter ships. Each faction will start out with a set of four default companions that are exclusive to the ships but you’re not limited to only using these.

The assigned positions for the default companions and their names are below:

After choosing your starfighter ship, you’ll pick out your crew. You’ll start by choosing your co-pilot from one of the four default companions listed above for your faction.

While you can use any unlocked companion, you want to make sure you have a diverse crew since they are designed to perform maintenance on the ships when you’re not engaging in combat. You’ll need a crew that has the skill to perform the different duties required. For example, you don’t want to end up with two offensive companions and none for tactical support.

The name of the companion, each of his or her default abilities and a description of what each one of the abilities do are shown below.

Passive Bonuses for the Default Companions

Now that you know the names of the default companions, the position they hold and the passive and active abilities they offer, it’s time to get to know the crew on a more personal level. These companions will interact with you making your experience more fun and engaging. For example, the co-pilot will shout out commands and the crew will warn you about missile locks or when the objective changes. They’ll even yell at you from time to time if you make a mistake just to keep things interesting.

Another thing that makes the new Starfighter ship NPC companions so interesting, is that each one has a fascinating story to tell about their past. Here is a look at each one of the default companions background history.

MZ 12 started out as a maintenance droid providing service for the Sith Empire on the Darth Immern cruiser during the Great Galactic War. When Darth had problems with his crew, the MZ 12 took over and handled most of the ship’s systems. It was able to guide the ship to a waystation, even though it was not programmed to do so.

After this, Darth had the droid’s programs upgraded so it could serve as his personal navigator and it become very knowledgeable when it comes to the ship’s sensors and comms. MZ 12 has been searching for a new job where it can put its expertise to good use since the death of Darth Immern.

Salana has lived a rather strange life spending years working for a crime syndicate on Hutta, where she made a living following her boss’s orders to beat up anyone that crossed him. She has never really felt like she belonged anywhere even when she was with family, so it doesn’t bother her when people call her an alien.

She thoroughly enjoys causing her enemies pain and making them suffer and she is known for being a bit bitter towards everyone. She now focuses her aggression on the enemy as she holds the position of starship gunner. While she hasn’t figured out what she’s searching for to be happy, she still hopes that that she’ll find it one day, while exploring the stars.

Aven began his career in the Navy as a shield technician. His famous parents were not happy that he joined the navy, so they sabotaged his career by getting him discharged without warning. Instead of being bitter about what his parents did, he stayed calm and positive seeking a new career where he eventually became part of the Empire starship crew. The crew accepted him even with his sudden discharge from the navy and he strives to prove that he is a worthy combatant loyal to the Empire.

One thing that Hurley loves is technology, which is evident by his constant discussions on micro-fusion condensers and hyper-drive motivator cores. What tends to freak everyone out is that he has these discussions even when he’s alone, which makes him appear a bit weird. The fact that he tends to be disrespectful most of the time, too doesn’t help him make friends.

However, his constant babbling helps him to stay focused on the job and he is definitely an expert in his field. Even those that don’t understand him or even like him for that matter, have to admit that his talent and supreme abilities override his flaws. He has a crush on Darth Acina, an Imperial technology guru, and his dream is that one day she’ll notice him.

B-3G9 is a former combat analysis droid that often thinks about an earlier time, when its defensive strategy was credited for the Republic’s victory in the famous First Battle of Bothawui. As a reward for its excellent service, it was sent back to the Czerka factory to be upgraded. Unfortunately, the factory made a mistake and had already begun remapping its circuitry as a protocol-droid before they found out. At this point, it was too late to turn back the process and B-3 was turned into a war strategist.

B-3 is very skilled when it comes to defense management and shield-to-power conversion. It’s well liked because it has a modest and polite manner and it’s still one of the best in its field even though its tactical abilities will never be what they once were.

Kendra has a natural ability to understand and work with complicated calculations most people could never understand, which became apparent when she sliced a computer system successfully when she was only seven years old. She illegally acquired quite a huge fortune by the time she was an adult but eventually she was caught, put in jail and all of her assets were taken away.

The Republic military saw her true potential and offered her a position in the navy, which she graciously accepted. She’s enthusiastic, sentimental and creative all rolled into one. In fact, she is the one who invented the Koiogran Turn, which she named after Koiogra her home system. While she does think about her former life from time to time, she would never do anything to ruin the opportunity the Republic navy gave her.

Ashy is a Rattataki with light gray looking skin. Famous Imperial socialites adopted him at a young age but they did not treat him very well. He thought they were preparing him to become an Imperial officer even though they often treated him more like a pet in front of their friends instead of a person. To fulfill their dream he tired to join the Dromund Kaas military academy only to be turned away humiliated.

This caused Ashy to defect and join the Republic military as a weapons specialist. He is one of the best with a remarkable record. He’s proud to be a Galactic Republic citizen and he makes it a point to send his former family holorecordings that show each and every one of his battle achievements as a Galactic soldier.

Oro is an Ithorian who has been totally fascinated with ships and the technology associated with them since the first time he saw one land on his home world. He believes that both mechanical and living systems are the same and that both should be carefully cared for and nourished.

He stowed away on a pirate aircraft and taught himself how to take exceptional care of the engines and that’s where his career as a hired hand began. Working for any ship that would hire him, Oro learned how to be tough but inside, he’s still very kind and caring. It’s for this reason that he dedicated his life to taking care of the ship’s engines and other mechanical parts after seeing how the Sith Empire wreaked havoc all across the galaxy.

Knowing a little about the SWTOR default companion’s history, will help to make the gameplay a little more fun and interesting as you fight the enemy together.