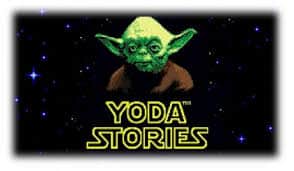 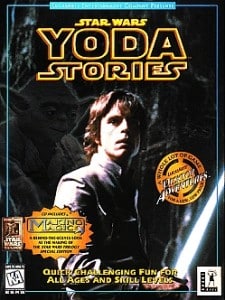 They don’t make games like these anymore. It isn’t overly complicated or terribly pretty by today’s standards, but that’s the source of it’s charm. It is exactly now what it was then: a desktop game, a way to fill an hour or so between work projects or homework. The adventures are randomly generated, the dialogue is humorous, and the game itself brings an innocence and nostalgia back to a period that has otherwise largely lost it. For a Star Wars game, it captures the feel of the movies in a way that many modern games with the same license don’t. Why? Because the material, too, evokes a more innocent time, back before special editions or blu ray edits. It’s Star Wars as it used to be, as so many of us grew up with.

As part of Lucasarts’ Desktop Adventure Series, players take control of Jedi-in-training Luke Skywalker, as he completes various missions and tasks set forth by Master Yoda. The missions, which average “under an hour” as boasted by Lucasarts, consist of puzzle-solving and light action on three distinct types of worlds: Desert (Tatooine), Snow (Hoth), and Forest (Endor). Although the worlds bear a strong resemblance to each of the above-mentioned planets, for the spirit of an “Expanded Universe”, each climate is a completely different planet each time that you play.

The graphics have a cutesy big-headed anime look and feel to them, and you will frequently run into various friends and enemies of the Star Wars universe, ranging from Han Solo to Boba Fett. Animation is sparse, giving the game more of a South Park look as characters push that one frame of animation to its limit. Still, the overall look of the graphics showcases a fairly respectable amount of detail within its familiar characters and settings. 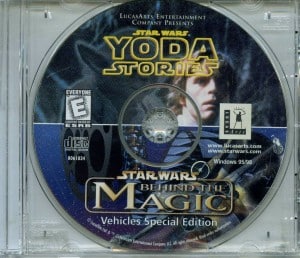 Sound is almost non-existent in this game, using only minor music, voice and sound effects. The majority of the samples, however, are accurate to their film counterparts.

Control is simple, either using the keyboard’s arrow keys or the mouse. If you know how to use one or both, you’ll master the game’s controls within minutes.

Now for the heart of this game: the playability factor. As stated above, each adventure is approximately an hour long, so this is more of a pleasant time-passer than anything else and it’s more fun blasting Stormtroopers and Tusken Raiders than shuffling cards in Solitare. The puzzles are actually intelligent and fun, although most of the game is played out like a scavenger hunt: Find the hidden switch, trade an item or talk to a certain person in order to find the information/items you need. As Luke progresses in the game, he will find a lightsaber and “The Force” which he can use to zap enemies or control minds. If all else fails, Luke can also rely on his trusty blaster. As Luke progresses in the game, he will be tested by Yoda (among one of the tests in fighting the “spirit” Darth Vader on Dagobah), and will be rewarded with such items as a more powerful lightsaber and a stronger “Force” ability. The dialogue is cheesy, as the characters occasionally say things that give them a “golly gee whiz” attitude, but it’s nothing that hinders the game playability or objectives. What keeps the replayability factor high in this game is the fact that each world and mission is randomly generated, so playing the same mission over and over isn’t commonplace. 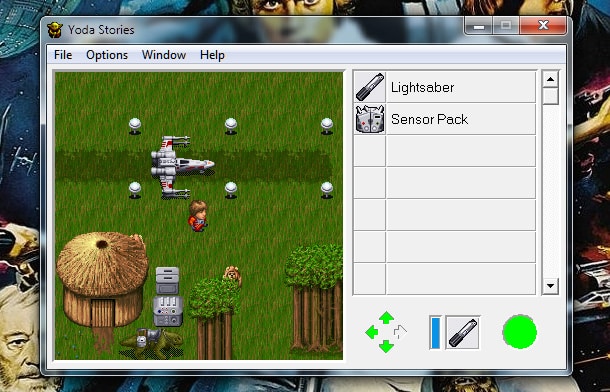 The game also included a few freebies that further round out the package: A Yoda Stories desktop wallpaper, a few character icons, and Making Magic, a behind the scenes look at the making of The Special Edition.

Yoda Stories doesn’t claim to be anything else than what it seems to be: A short, entertaining time passer that focuses more on the brain than an itchy trigger finger. The game can be found sold by itself or packaged with the multi-media Behind the Magic. While Jedi Knight is by far a more adventurous and exciting path to becoming a true Jedi, remember the words of Master Yoda: “A Jedi craves not these things”.

The game was reviewed harshly when it first released, but the critics missed the point of it. Yes, compared to games today, or even the “real” games of the time, Yoda Stories may seem really lame, but this was never meant to be a “real” game. It has always been a “desktop” game, a diversion you can enjoy in less than an hour’s time when you want to take a break from homework/chores/whatever. As a replacement for, say, Solitaire, Yoda Stories truly shines.