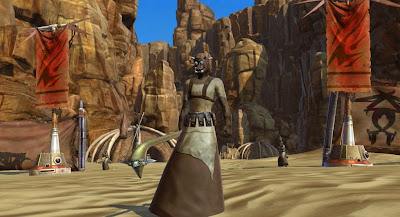 Tusken Raiders are a reclusive, xenophobic people, resentful of the centuries-long history of encroachment upon their homeworld of Tatooine by aliens. Like the Jawas, whom they hold in disdain and are often violent toward, they have a tradition of keeping their faces covered, such that no one really knows just what a Tusken Raider truly looks like under all those bandages, and those face masks made of scavenged scrap. 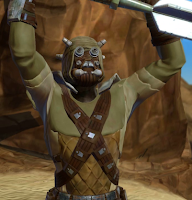 Tusken Raiders, also known as Sandpeople, acquired their name by their first siege on Fort Tusken during the Old Republic era. Their language is throaty and raspy, and their voices made all the more terrible by the hand-crafted face masks they wear to shield them from the blasts of wind-borne sand, and to retain precious moisture, which is in scant supply in the desert. Their clashes have been many with the inhabitants of Tatooine, though they are not particularly brave in their assaults — They typically attack small farmsteads on the fringes of settlements, or waylay unwary travelers, and generally only when they have superiority of numbers. Sandpeople are most dangerous in their adolescent years, as they must survive hazardous rites of passage — such as hunting krayt dragons — in order to be considered adults.

Their craftsmen are adept at fashioning variations on a basic weapon known as the gaderffii (or, in Tatooine slang, “gaffi stick”), which is basically a pole with a blade and a pick on each end, usable as a bludgeon, or for more sophisticated fighting to come at an opponent from both sides in rapid succession. The blades on these weapons are surprisingly sharp, thanks to some of the unique components that can be found in the many crashed spaceships that have accumulated in the desert over the centuries. They also make use of slug-thrower rifles of antiquated design.

The Sandpeople have a close relationship with a huge beast known as the bantha. They weave coarse cloth from bantha hair, and use them as mounts and beasts of burden. When a Tusken Raider loses his mount, it is a considerable disgrace. He is considered “incomplete”, and is an outcast, generally leaving his clan until he can find and tame a new bantha. Similarly, when a bantha’s owner dies, it generally behaves belligerently, eventually going into a suicidal rampage — therefore, the Sandpeople send the bantha off into the desert to survive or die on its own. 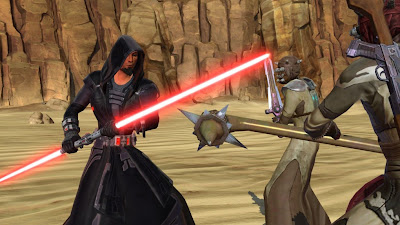 Life is harsh in these clans, and they have no room for graces or subtleties. As they have no written language, they have a rich oral tradition, singing tales of the heroic epics of long-dead ancestors in their ululating cries. The tellers of these songs are specially ordained in the tribe, each new teller selected by the elder. In order to preserve the integrity of these tales, which are never written down, the teller of tales is held to very strict and harsh expectations — When a new teller is given his final test before the tribe, if he adds or omits but one word from the tale, he will be struck dead on the spot.

Personality: Rough, uncultured, severe, select and few in words, with a “warrior culture mentality” and a scavenger’s nature.

Physical Description: Tall, muscular humanoid, wrapped in coarse brown fabric and bandages, with a face mask and trappings fashioned from scavenged parts from crashed starships. The traditional Tusken Raider facemask has two stalk-like eyepieces, two more jutting pieces of unknown purpose on each side of the mouth, and a large mouthpiece deliberately fashioned to resemble the mouth of some ferocious beast. What exactly is underneath those wrappings is unknown, and a Tusken Raider is not inclined to satisfy anyone’s curiosity.

Language: Tusken Raider. One that would bother to learn any other language is rare indeed.