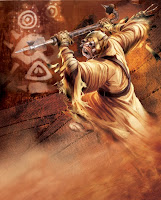 The Gaderffii, or Gaffi stick, was the traditional melee weapon of the Tusken Raiders of Tatooine. Crafted out of whatever salvage was at hand, they were very effective in close combat. Nearly every Tusken was proficient in the use of these weapons and more Tuskens chose the gaffi over the Tusken Cycler.

The weapon was of the staff-variety, on average about four feet long, with a weapon-head on each end. The first resembled an archaic flanged mace, with each of the four or more flanges sharpened like an axe-edge. Upon the tip was a spearpoint. The opposite end of the gaffi stick usually was bent into an L-shape, with a large and heavy club head tipped by a hook or second spearpoint (which itself was often tipped with sandbat venom) which would inflict maximum pain 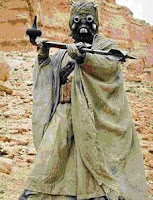 to an enemy. The dual weapon-heads gave a gaderffii-wielder a wide and versatile amount of attack options. The axe-mace could chop and hack; the spearpoint could thrust and stab; the club could bludgeon and crush; and the hook could rip and trip an opponent. In a more mundane fashion, the gaffi stick could also be used in many day-to-day survival chores, such as hunting or even digging.

Though the gaderffii were made out of whatever materials the Sandpeople could find, desired materials included hard metals such as iron and steel. The best gaffi sticks, often seen in hands of veteran warriors or chieftains as rank symbol, were made out of the rare durasteel plating found on derelict starships or vehicles that had been “slagged” upon Tatooine‘s surface. Such weapons were highly valued, being exceedingly durable. Perhaps it was such a weapon that was able to sunder Luke Skywalker’s slugthrowing long rifle when he was attacked in the Jundland Wastes before leaving the planet for the first time.

Sandpeople prized their gaderffii and would not part with them willingly. Thus, when bounty hunters were sent to eliminate hostile raiders, they were told to return with their gaffi sticks as proof of the kill.