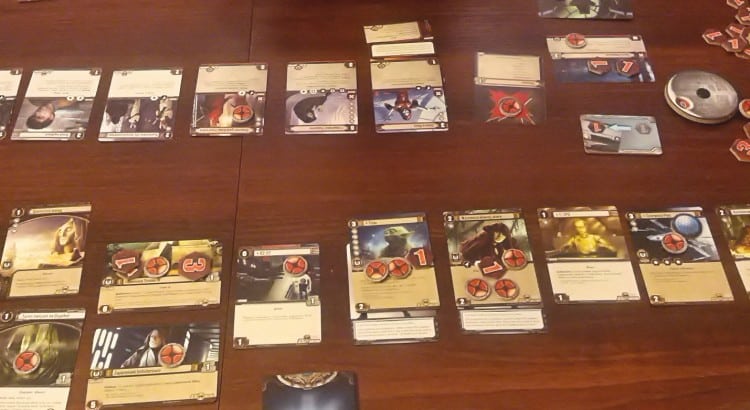 Ah, card games… an interesting little pastime that has grown in popularity since Wizards of the Coast put out Magic: The Gathering in 1993. I was still young then and it would be a few years more before I started playing but I still play MTG today. I played a lot of card games over the years, none in as much depth as MTG (except maybe Pokemon – don’t judge). However, there is one card game I really wish I had played more of. My friend came to school with a deck one day and we were very much enthralled. It was the Star Wars Card Game.

To play, you needed a 60-card deck with your characters, locations and effects. It was pricey to build a deck, especially if you were particular about playing your favorite Star Wars characters or scenes. Just like most card games, they were sold in individual packs of 15 cards at around $3 a pack. To get 36 packs, a fill box would run around $100. Each pack had several common and uncommon cards and one rare. These card games often become trading card games as well because you end up with so many duplicates of cards you don’t need and want that trading with your friends seems the economical way for everyone to be happy. Any way you slice it, you were going to be paying some money though.

So this is one reason I never really had a deck of my own, despite playing the game a bit with friends. By 1997, there was something of a competitive scene building around this card game and that is what we’re talking about today. Eric Berger shared a really awesome story for ArsTechnica.com’s Ars Cardboard (“a weekend look at tabletop games”) column about the time he played in a Star Wars card game world championship.

In this article, he gives a lot of personal background into how he got into the game, his history with playing and then eventually, how he ended up at the World Championship. Here’s a snippet:

With my new strategies, I aced the tournament, playing eight games and winning them all. The state’s big-time players, like Matt Lush, wondered who I was. This dream-like experience entitled me to an all-expenses paid trip to Norfolk, Virginia, where Decipher was based, for the second World Championship event.

Alas, with little background in competitive play, I was overmatched. By then, “mains and toys” players had adapted to the tweaks, and those with the richest card pools again held the advantage. I won a single game out of six and finished near the bottom of the 64 competitors from around the world. (Philipp Jacobs, a German, won the tournament.)

Still, the trip wasn’t without perks. One night we dined with a man who was a personal assistant to Peter Jackson, the director; he said Jackson was working on adapting the Lord of the Rings trilogy into films.

In honor of The Force Awakens hitting theaters soon, Berger drug out some of those old cards and let the nostalgia wash over him. We think that’s pretty great! It’s worth the read. Also, if you’re worried that you missed out on your chance to enjoy the Star Wars card game, you’re in luck. The game still has a community with new card releases and a handful of tournaments.  There are a couple of methods to play online with virtual cards as well.