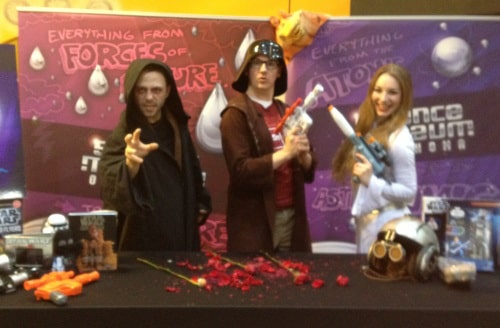 The museum director of education and training, Clint Stone, said the overnight exhibit will have trained science educators who teach the visitors about the science of “Star Wars”, comparing ways the real world stacks up against a galaxy far, far away. It’s a timely event, considering the upcoming release of Star Wars: A Force Awakens but it’s more than just exploiting the popularity of the film to get kids interested in science. This is a great example of how Star Wars truly is a culture, rather than just a movie franchise.

When educators are using Star Wars’ popularity to connect with people of all ages, to nurture an interest in science, and to increase participation in neighborhood museums, that’s a very, very good thing. It also shows how the franchise can really take on a life of its own, outside of just the movies and merchandising. People connect with Star Wars in a much deeper way.

What will the kids get to do at this overnight event? Stone said guests will get a chance to build hovercrafts with household objects. “Some will be large enough for guests to glide around the floor on,” he said.

They are also going to get to see firsthand the freezing properties of liquid nitrogen in an introduction to cryogenics. They will explore the technology behind light sabers, and there will also be a robotics presentation. Stone said the evening also will include a special “Science Live!” show and a planetarium show.

Guests are even invited to dress up!

This sounds like the coolest museum event in the history of museums. How far is it to Oklahoma anyway?