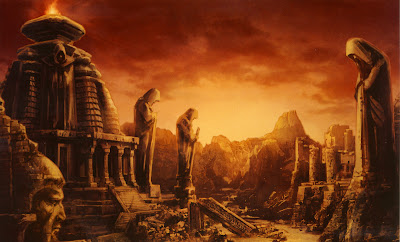 The Valley of the Dark Lords, also known as Valley of the Sith Lords was a valley and burial ground of Korriban’s Sith Lords. The Sith Great Temple was located in the valley.

A number of different layouts and appearances have been given to the valley in various publications. This is, in the case of video games, mostly due to memory restraints and practicality.

The valley was used from the time of Great Schism through to the time of the Galactic Civil War to bury worthy Sith Lords. The tombs were built before the death of their lords, and, upon their demise, were filled with riches and slaves. Notable lords to be buried in the valley included Ajunta Pall, Marka Ragnos and Tulak Hord. On several occasions, dead Sith would become Force ghosts and haunt their tomb. In the Great Temple, the Sith spirits were even able to preserve the mummified bodies they once inhabited.

While a tomb for Naga Sadow was also constructed, it was never used, as the Sith Lord spent his remaining time on Yavin 4. Sadow’s empty tomb housed an ancient Rakatan Star Map, an artifact of the dark side.
Once a major stronghold of the Sith species, the planet fell to the Republic in the aftermath of the Great Hyperspace War and many important relics were taken off world or destroyed. The valley would be completely abandoned for hundreds of years with no visitors until Freedon Nadd slew his Jedi Master and eventually stumbled upon the forgotten world and visited the tombs. Shortly prior to the Great Sith War, another fallen Jedi named Exar Kun would follow Nadd’s direction and also visit the valley; this time a Sith Academy was established with the aim of excavating the considerable amount of ancient artifacts. 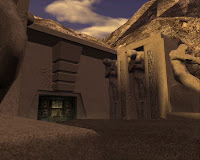 The redeemed and amnesic Darth Revan would visit Korriban during his quest for the Star Forge and infiltrate the Sith Academy as a student in order to gain access to the valley. He would visit four of the tombs including those of Marka Ragnos, Ajunta Pall, Tulak Hord, and Sadow (only accessible during the final test). Although the sites had been heavily damaged by previous Jedi visitors and Sith archeologists, Revan was still able to retrieve numerous invaluable artifacts including Ajunta’s sword as well as Tulak’s holocron. After the Jedi Civil War, the prodigal knight would return to the valley at least once more and assisted the Jedi Order in destroying the remaining Sith treasure. When the Jedi Exile came to the planet five years later in her search for the lost Jedi, she found most of the tomb entrances to be blocked although at least the burial chamber of Ludo Kressh remained largely unscathed.

The Valley of the Dark Lords would become largely ignored by subsequent generations of Sith; dark siders during the New Sith Wars would seldom if ever visit the site as a centuries of looting and conflict had largely destroyed anything of value. Nonetheless a headstrong and powerful student named Bane would defy his masters and make the treacherous journey in hopes of uncovering ancient secrets–the mission was in vain as nothing remained in the ancient tombs, prompting the young Sith to turn his attention to other strongholds of the dark side.