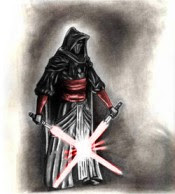 Tulak Hord was a Dark Lord of the Sith that ruled sometime during the early Sith Empire, after the use of lightsabers became prevalent. Hord wore a claustrophobic black mask, making him a fear-inspiring sight.

There is some disagreement as to when precisely Tulak Hord lived. Kreia seems to imply he was an ancient Dark Lord from the first Sith Empire, yet she also calls him a lightsaber master, and it is widely believed by fans that the Sith did not use such weapons until they re-established contact with the Jedi and the Republic after the Great Hyperspace War.

It is unknown how Hord died, but his power was so considerable that a burial chamber was built in his honor in the Valley of the Dark Lords on Korriban. In later years, both Revan and the Jedi Exile visited his tomb, though the entrance was blocked and the tomb looted by the time the Exile arrived.

It was said of Hord that he was the greatest of the ancient lightsaber masters of the Sith. He was said to have been buried with a holocron containing his teachings on lightsaber dueling.

Inside the burial chamber, Revan discovered three lightsaber crystals: a violet crystal, a firkrann crystal, and a bondar crystal. These crystals may have been used by Tulak Hord in his lightsaber.

Jorak Uln went into hiding inside the tomb after he was deposed by Uthar Wynn as the Headmaster of the Sith Academy on Korriban. When Revan ventured into the tomb during his quest to find the Star Forge, he was captured by the former headmaster. There Revan and his companions joined forces with Mekel and defeated Jorak.