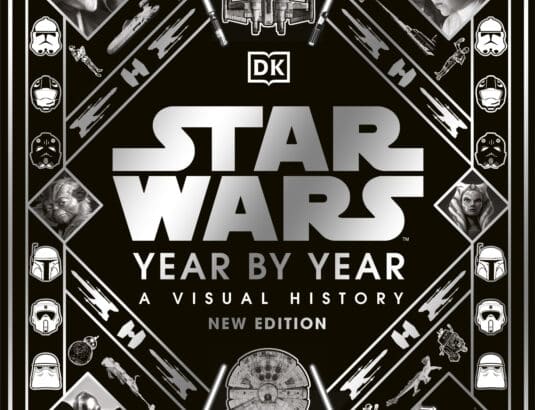 Are you a Star Wars fan looking for the ultimate encyclopedia of everything Star Wars? Look no further than the newly updated edition of “Star Wars Year By Year.” This hardcover book, set to release on November 2, 2021, is a comprehensive guide to the Star Wars franchise, covering every film, television show, video game, and more from the past 44 years.

The book is organized chronologically, starting with the release of the original film in 1977 and continuing through the present day. Each year is filled with information about the various Star Wars releases and events that occurred, including behind-the-scenes details and trivia. The book also includes exclusive interviews with filmmakers, actors, and other key figures in the Star Wars universe, providing unique insights and perspectives on the franchise.

One of the standout features of “Star Wars Year By Year” is its stunning visuals. The book is filled with high-quality images and concept art from the films and other media, allowing fans to see the evolution of the Star Wars universe through the years. The book is also packed with quotes and anecdotes from the filmmakers and actors, making it a truly immersive experience for any Star Wars fan.

In addition to covering the main Star Wars saga, “Star Wars Year By Year” also includes chapters on the expanded universe, including the animated series “Star Wars: The Clone Wars” and “Star Wars Rebels,” as well as the various Star Wars video games and novels. This makes it a must-have for any fan looking to delve deeper into the Star Wars universe beyond the films.

Whether you’re a die-hard Star Wars fan or just looking to learn more about the franchise, “Star Wars Year By Year” is the perfect addition to your collection. With its comprehensive coverage and stunning visuals, it’s a book that any Star Wars fan will treasure for years to come. So don’t wait – order your copy today and join the ranks of Star Wars fans around the world in celebrating this iconic franchise.