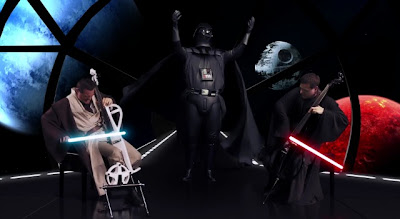 Long ago in a galaxy far, far away…

Cello Wars (a Star Wars Parody) Lightsaber Duel was held. It was an epic battle, Vader plays the accordion and Chewy dances. It’s not a meeting you will soon forget.

We love that these guys pulled off this very fun video and of course, had to share it with you.

This is what they have to say about their feat:

“We announced CELLO WARS on September 19, 2011 thinking we’d be able to deliver on our promise within a few weeks. We had NO IDEA. 70 days later, more than 7,000 frames, 72 audio tracks, 24 hours of filming through the night in front of a green screen, the most props and costumes we’ve ever used, several broken bows and strings, and over 1,000 hours of editing and rendering — we felt like we had taken on the entire EMPIRE!”

It’ pretty awesome! Check it out for yourself: