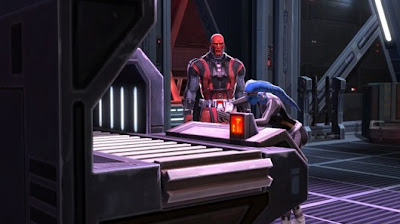 Associate Lead Designer, Emmanuel Lusinchi posted a very long revision today on the official SWTOR forums about the modification system patch notes. He says his patch notes were poorly written and that he wanted to make the post to clarify any confusion. It was a bit of wall of text, however, and I honestly don’t see how the modification system changes were so confusing in the first place.

To start with, we’ve introduced a new color and item type: the Custom items. Those are shown with an orange border and are fully moddable. This change is purely cosmetic. What we have done is take all fully moddable Prototype items (blue) and simply changed their icon color. This helps us create a better and more unique identity for fully moddable gear.

Ok, we’re with you so far. He then describes the main issues with the old modding system:

The main issues of the old system were as follow:

– There were too many different modifications. Sure, the mods had a lot of flavor and made sense: triggers and scopes for guns, underlays and overlays for armors, power cells and crystals for Lightsabers, etc. But in the end, keeping the mods in all gear up to date every few levels was a major pain on the players’ side. Remember, at that time, mods could not be extracted – so a replacement for each and every one of those mods had to be individually located every few levels. And let me tell you, creating and maintaining all those tens of thousands of mods on our end was also not exactly sustainable.

– Some items only had a few mod slots. I know everyone by now remembers a ‘perfect’ world where everything was moddable, but that simply wasn’t the way it worked. Most premium (green) items did not have a full set of slots and which slots weren’t present was a bit random. So, you could find a purple trigger and get all excited about fitting it on your moddable gun – until you realized the gun mysteriously had a scope slot, but not a trigger slot. Of course, your next gun could have a trigger but no scope. This left many players scratching their heads.
– Once slotted, a mod could not be removed. This had a very perverse effect: players would find a really good mod – say a purple overlay – but would really hesitate in slotting it into an armor. What if they find a cooler looking armor next level? Many players would end up saving their good mods for later and ended up over leveling them.

– Mods that were crafted or purchased were most of the time inferior to the mod already slotted onto a prototype (blue) item. This made the entire mod system somewhat useless. One of the main reason was that crafters could not create good mods. Reverse engineering – the main method to obtain prototype and artifact (blue and purple) crafted items – did not work on mod.
– Modding was only done at a workbench. This made it rather cumbersome as the players had to hunt down a workbench before they could fit a new mod into one of their items.

Finally, he details all of the changes, what they were and why they were needed. For example, “To put it simply, we want moddable items to offer an alternate and optional loot system that allows players to customize their look and their stats with more freedom and without penalty for doing so.”

You can read the full post to learn everything that was changed in much better detail for yourself. He ends with a thank you to all the testers.