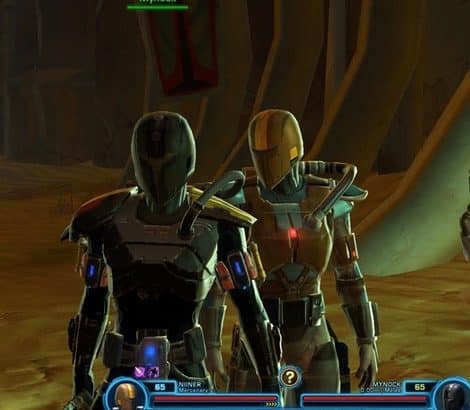 How would you feel if you got a character named after you in SWTOR? This is one of the highest honors for a video game fan and it happens from time to time in some games, with someone who has done something special or recognizable with the game or the community.

This is awesome but we’ll let Mynock tell you about it himself in his own words:

The folks at BioWare have bestowed a huge honour on me by naming a character in Star Wars the Old Republic after me!

“”Mynock” is a mando warrior NPC who can be found guarding the entrance to Shae Vizla’s camp on the planet Darvannis in the latest STWOR expansion “Mandalore‘s Revenge””. I had a little bit of say in the armor type, colour scheme and weapon he’s sporting, so now I have no excuse for not finishing my Shae Armor set! It shall be done!

If you’ve been following my posts here, you know I’ve written about him and his cosplay work before. We wrote about his SWTOR Eradicator (Lord Adraas) Sith Acolyte helmet and his SWTOR Knights of the Fallen Empire Arcann mask, one of which was framed and gifted to the SWTOR BioWare developer team. He’s done some awesome work and we love to see what new projects he’s working on, see his pics from conventions, and we’re happy to see BioWare recognize him in such an awesome way.

So have you seen Mynock in game yet? Head on over to Darvannis and check it out.