German magazine GameStar.de scored an exclusive interview with Gabe Amatangelo of BioWare to discuss Operations which has fans across the globe excited. Operations are the SWTOR version of raiding and guilds and individuals alike are anxious to see any info they can about it.
The September issue of this German magazine looks like a lead-up to gamescom, coming up in August in Cologne, Germany. This could mean more new reveals about SWTOR, possibly even about Operations but we’ll have to wait to know for sure.
Forum user Cebo has a thread on the official forums about it with people jumping in to help translate. If you speak German, you can go straight to the original source and check it out for yourself. Cebo offers a partial translation that confirms some fun details about operations such as:
8-man and 16-man raid/Operation sizes
All good stuff here. People seem pretty excited about the “loot bag” option. Those who have played WoW have seen a similar method, as well as the badges. It seems like BioWare is trying to give people as much opportunity to get loot as possible and more incentive to participate in the Operations.
What do you think? 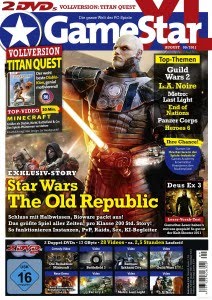