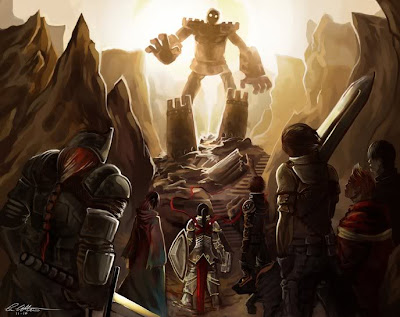 I heard a group of people enter my dorm room. I paid them no mind. I was focused. “What’s going on, on his screen?”
“Dude I can’t even tell what’s going on.”
“Ya, know I’m raiding here.” My annoyance was growing thin.
“Wrong side Marth,” was screamed into my headphones. I quickly corrected it before killing my raid group.“Can you guys leave or be quiet? I need to concentrate.”
“Sure, but what’s raiding?”

Raiding is a form of end game play. As I mentioned last week in my PvP vs PvE article, it is one of the two options players have to do with their max level players, and at the moment is more popular than PvP in World of Warcaft, though requires a lot more preparation.

The idea of raiding has many origins but was popularized during Everquest. Players group together in large groups of massive numbers. In the original World of Warcraft players went with forty players to defeat bosses. Usually raids are held three to four times a week for four to five hours. It’s very similar to a local swim team practicing the same motions and actions week in and week out attempting to improve their skills.

As a previous raid leader I know it takes a lot of work to run a raiding guild. Your guild constantly needs to be recruiting players that: match your needed skill level, what classes you need to fulfill various roles, fit in to your social group, and most importantly can raid at the same time as your team normally raids. In addition to recruiting you need a fair loot system that people can agree on. You also need researching fights for your team and to keep tabs on everyone to make sure they’re pulling their weight in the raid. As you can tell it’s a very rigorous and requires a ton of preparation.

So why raid? It seems like a lot of work. That’s because it is. In my personal opinion many single-player game boss battles have become too easy (I’m looking at you Fable 2). The idea of raiding is simply the next step up for me. The satisfaction of defeating a boss you’ve been stuck on for weeks is almost impossible to replicate with any game I’ve found so far.

So what will raiding be like in The Old Republic? Well, until yesterday Bioware has kept us in the dark about this aspect of the game. Yesterday Bioware revealed “Operations”, which seemed like eight player raiding scenarios. Though from what they showed in thier video with commentary nothing out of the ordinary seemed to exist. Though in their trailer at the end of video viewers could see puzzles, platforms and other nasty enemies to fight. More Operations are said to be announced before launch so players should have a large amount of end game raiding content including heroic versions of the fights. As always, may the Force be with you.