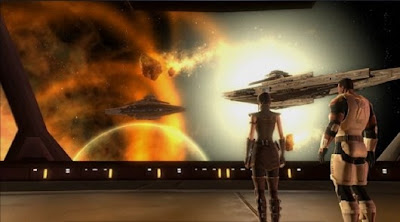 It’s a good day for fans of The Old Republic. Not only did we get some juicy new info out of the NYCC Panel but we also get to feast our eyes on a new Trailer and Operations Systems Page. It looks like BioWare decided to let the floodgates open today with a collection of five announcements! Here’s the list:

The trailer titled “Signs of War” is narrated by Satele Shan and features the trooper from the “Hope” trailer. The Operations Systems page gives a brief overview of each operation, along with some accompanying video and images for each.

As the Treaty of Coruscant dissolves, the galaxy finds itself back on the brink of all out war. Chaos and corruption run rampant, and the mighty armies of both the Galactic Republic and the Sith Empire prepare themselves for the inevitable showdown.

Watch the build-up to battle in the new Game trailer for Star Wars™: The Old Republic™, Signs of War.