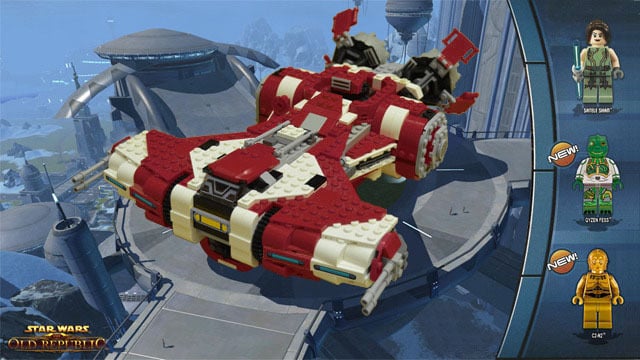 How would you like to see this as a new Lego product? It’s the Corellian Defender with Satele Shan, Qyzen Fess, & C2-N2 and this guy has a project up for funding. If they get $10k in support, it could get produced by Lego. So far there are over 500 supporters and nearly 20,000 views. If you like the project, help out by donating and/or by sharing the page for more SWTOR and Lego fans to see it.

Here is some info about the Lego set from the project description:

This is the Jedi vessel from the game Star Wars: The Old Republic.

Satele is a character from The Old Republic. Based on her use of the Double-bladed lightsabre her class is likely Jedi Consular. She already exists as a Lego Minifig.

C2-N2 is a support droid that resides on the Corellian Defender.

Qyzen Fess is a Trandoshan and is the companion of Jedi Consular characters (and thus the reason I picked him to go with this Project).

If you need to see this thing in three dimensions, there is also a Youtube video of an earlier build here:

Like the Sith Fury, this ship is built to scale with the statuette fig which is one brick tall (check here for a project elaborating on the part ). However, like the Lego Fury, the ship has been modified to use Minifigs.

As an homage to the actual scale I propose that a statuette be included in the set, but to make it much more interesting I would suggest that it be cast in trans-blue (translucent blue) so that it can be reminiscent of a Star Wars hologram (see picture ).

Let’s take a look back at the story we brought you the other day about SWTOR Legos and Lego sets. I have to say that this is just as cool- possibly even cooler- than what they have already produced. I would love to see this guy’s project turned into a real product. What do you think?