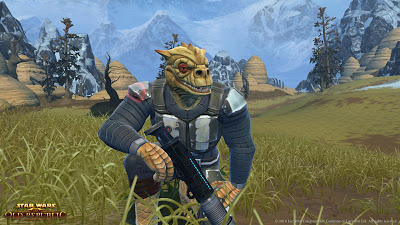 Bioware just released a bunch of new screenshots for their Inhabitants section. The first one that caught My Eye was the above  screenshot of a Trandoshan. I personally used to play this race in Star Wars galaxies

, so I thought it would be natural for us to cover this Species in this weeks “Species of Starwars“.

s (T’doshok in their language) were large, bipedal reptilian humanoids from the planet Trandosha (or Dosha). They had super-sensitive eyes that could see into the infrared range and the ability to regenerate lost limbs, although very slowly, and were anatomically built heavier and stronger than most humanoids, including Humans. They would also periodically shed their skin. Unlike some other reptilian humanoids such as the Barabels and the Ssi-ruuk, Trandoshans had no tails. The Trandoshans were a warlike species who allied early with the Empire, taking Wookiees as slaves.

As a species, they were renowned across the galaxy for great strength. This is evidenced by several members of other species boasting physical prowess and power by having defeated a Trandoshan, either in battle or in a contest of strength

Trandoshans were a large, bipedal sentient species, with scaly skin—which ranged in color from sandy brown to glossy green, which was shed roughly once every standard year. Cold-blooded reptiles, Trandoshans had two super-sensitive orange eyes with horizontal black pupils, which could see far into the infrared range. Trandoshans could regenerate lost limbs and skin until they reached their middle ages—around fifty-four standard years. Each of their four limbs ended in three razor sharp claws, which although perfect for combat, they did not grant them manual dexterity, making a Trandoshan’s finger movements somewhat clumsy and awkward. Though physically powerful, they were outmatched by their rivals, the Wookiees, in unarmed combat.

Trandoshans usually wore dark clothing, although the species’ attire varied. The infamous Trandoshan bounty hunter Bossk was known to wear a yellow flightsuit, something worn by several other members of the species. Trandoshan hunters and mercenaries sometimes wore either full body armor or a mixture of armor and cloth garb. Trandoshans also often wore warm jackets and baggy trousers. Their large, scaled feet also meant that it was impossible for them to wear any sort of baseline humanoid footgear, which could present impediment to hunting. 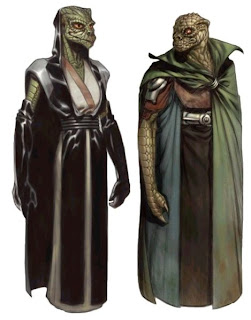 Society and culture
Trandoshans worshiped their goddess, the Scorekeeper (a deity who exists beyond time and space), whom they would appease through acts which increased their jagganath points. This was done by living a lifestyle which was, by non-Trandoshan standards, overtly aggressive, leading many Trandoshans to become bounty hunters, mercenaries, or slavers. Trandoshans especially prized Wookiee pelts, which consequently played a large part in earning jagganath points—capturing the pelts of rare Wookiee breeds (such as silverbacks) or particularly infamous Wookiees would give the hunter a large increse in jagganath points. To be shamed or captured during a hunt would zero one’s jagganath points—effectively making their life forfeit in the eyes of the Scorekeeper. They could, however, win all those points back by killing the one who zeroed there score. Like their neighbors, the Wookiees, the Trandoshans also honored life debts. The recipient of a Trandoshan life debt was referred to as a ghrakhowsk. Trandoshans are known to eat bowls of still live worms as a favorite meal. A traditional Trandoshan food is a Trandoshani flatcake.

There were rare cases of Trandoshans not adhering to their millennia-old cultural traditions. One such was the mercenary and assassin Nakaron whose self-confidence caused him to disregard the Trandoshan class system, being rude and disrespectful towards the Elders of the Dosha city of Forak, causing him to be banned from that city, and subsequently more cities until he was virtually exiled from Dosha.

Most cultures long ago abandoned the primitive sword in favor of the more lethal vibroblade. Trandoshans, however, wielded such archaic weapons as badges of honor. Both the Trandoshan Sword and the Trandoshan Double-Bladed Sword were traditionally forged using the rare ore Chalon which made them sharper and heavier than Republic blades. 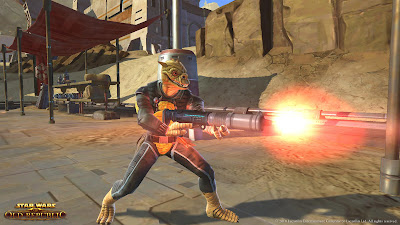 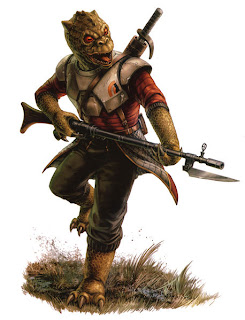 History
The Trandoshans originated on Trandosha, also known as Dosha or Hsskor. It was in the same star system as Kashyyyk, the homeworld of the Wookiees. In 7,000 BBY, the Trandoshans joined the Galactic Republic. During the New Sith Wars Sith troops landed on Trandosha, and the Trandoshans slaughtered many of the troopers. The Sith retaliated by invading their world and burning the homes of the Trandoshans, leading the surviving Trandoshans to save themselves from death by pledging loyalty to the Brotherhood of Darkness.
Prior to the Clone Wars, Trandoshan bandits invaded and occupied the planet of Jabiim before later moving on. At this time, Dosha was only indirectly represented in the Galactic Senate by the Wookiee Yarua, much to the Trandoshans’ dismay. In response, Trandoshan terrorists attempted to assassinate Yarua in 32 BBY. In 23 BBY, a Wookiee vessel was attacked over a moon of Trandosha, resulting in a Wookiee blockade of Trandosha. Peace talks to resolve the issue were conducted 22 BBY and failed when it was revealed that the Trandoshans were pushing for Senatorial representation with Trade Federation backing. During the Clone Wars, some groups of Trandoshans involved themselves on the side of the Confederacy of Independent Systems in several engagements. One such example occurred more than one year after the onset of the Clone Wars when the Acclamator-class assault ship Prosecutor was taken over by a joint force of Trandoshan slavers and CIS battle droids.

Later, the Trandoshans, with the help of CIS forces, invaded the planet of Kashyyyk to subsequently enslave the Wookiee natives. The invasion of Kashyyyk by the CIS led towards an expeditionary team of clone commandos being sent to Kashyyyk by the Galactic Republic, this act ultimately led to the Battle of Kashyyyk itself. Trandoshans also worked as mercenaries and bounty hunters during that time period. Bossk was a famous bounty hunter from the time of the Clone Wars and for decades thereafter.

Force Sensitives
It was uncommon but not unheard of, that some Trandoshans were Force-sensitive. Because of their reputations as bounty hunters they weren’t usually accepted as Jedi or even Sith; There were exceptions, however, such as the Jedi Lissarkh, a Padawan of Plo Koon, and the rogue Jedi Kras’dohk. Normally they would use their Force Sensitivity to their advantage as bounty hunters. 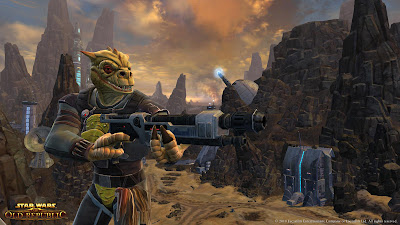 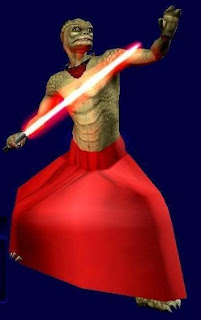 Saurin Subspecies
At some time in their history, a population of Trandoshans became isolated for unknown reasons, and eventually adapted along a separate lineage and became the subspecies Saurin.

They were notably different in their physiology for featuring translucent eyes, and having adapted five-fingered hands, with shorter fingers than their genetic cousins.

It is unknown if Saurins carried the Trandoshan ability to regenerate lost limbs, or held any of the same basic traditions and beliefs, such as bounty hunting, and scoring kills to appease the deity The Scorekeeper.