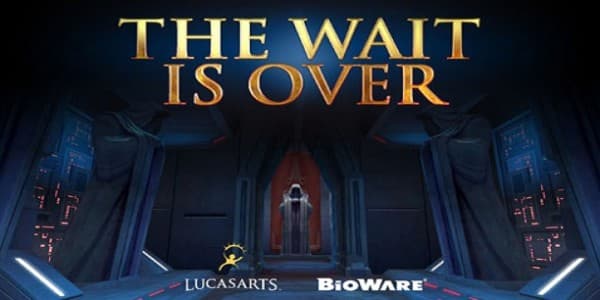 What do you know… This upcoming Saturday, Star Wars: The old Republic ( SWTOR) have been around for 3 years. I still remember when I started this blog about the game back in 2008, right when I heard about the game the first time.

Now BioWare want’s you to share where you were 3 years ago when we launched. Or, share a happy memory of yours from the past 3 years! We will also have devs, other members of the community team, etc. swinging into the thread to share there memories! Check out the announcement’s below:

Hey folks,
In case you don’t recall, December 20th, this Saturday, will mark the 3-year anniversary of STAR WARS: The Old Republic. As part of that, we thought it would be fun to start a thread so all of you can share where you were 3 years ago when we launched. Or, share a happy memory of yours from the past 3 years! We will also have devs, other members of the community team, etc. swinging into the thread to share there memories!
I’ll kick it off! Working at BioWare is actually my first job in the game industry so this was the first product I ever got to help launch. By far my favorite memory is the day of early access we all stood around the monitors in our “Live Pit” to watch what happened when the servers went up. We gave the go ahead and watched as the populations for each server began to go up! It was a surreal experience to see thousands of players swarming into the game within minutes, seconds even. I will never forget it.
Share yours!
-eric
Post 2
DreadMasters
The chains of our enemies bound us. The minds of our enemies forgot us.
But others remembered. Others who were close at hand.
The hour had finally come.
Post 3
/u/taitwatson
At the time, I didn’t work for BioWare.
Just a few months before the launch, a few friends and myself sat in my friend’s living room where I first heard about The Old Republic. They showed me screenshots and trailers and I was hooked. We set up our guild using the web-based guild creator that night. Fast forward to Early Access and we were slashing through enemies as soon as the flood gates opened. The server we were on only lives on in spirit, but I still remember how much fun we had going through the content, carving our places in Galactic History.
On the second anniversary, I read a post from the Community team about their experiences over the past year, and in a line at the end mentioned that just after the new year, a new Community team member would show up to replace the recently-producer’d Amber Green. At the time I knew it was me, but they couldn’t say anything. I think that post made me more excited than the job offer, as it kind of solidified the idea. It was an amazing experience, and one I wouldn’t trade for anything else.
-Tait