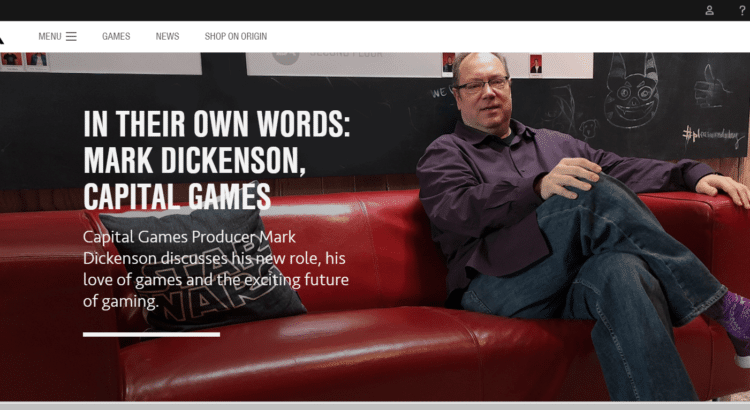 Mark has been working in the gaming industry for many years and brings his expertise as a veteran producer to Capital Games. He’s not a new face around the studio as he was previously working on Capital Games’ next project.

Here is an inteview:

You recently became the Senior Producer for SWGOH, tell us a bit about yourself!

MD – Well, that’s a big question. I’m a gaming industry veteran and earned my first video game paycheck back in 1987. That was actually working as an independent developer on a science fiction role playing game (Hard Nova) that was published by EA. Since then, I’ve worked for a number of video game companies including 3DO, LucasArts, & Telltale. It may sound like a cliche, but I am extremely passionate about video games – both developing & playing.

How long have you been with EA and Capital Games?
MD – I’ve been with Capital Games for little over a year and a half now. This is actually the second time I’ve worked at Electronic Arts. Previously, I spent nearly 7 years with EA SPORTS.

When did you start playing SWGOH?

MD – I started playing in late 2017. This was in the lead up to my interview process with Capital Games. By the time I joined the team, I had reached level 82. Since I started, I have played every day. My current GP is over 5 million.

What is your main role on the SWGOH team?

MD – The SWGOH team has incredible leaders and an equally incredible group of folks working on the game. My role is to work with the team to align on the future roadmap for the SWGOH experience. I will also be very involved in partnering with the team’s leaders in navigating the day-to-day challenges related to the operation of an extremely popular live service experience.

I’m very excited by the plans we have for upcoming updates.

How is working with Capital Games different from your previous roles?
MD – While I had worked on episodic games, this is my first experience working on games in the free to play space. I also have extensive experience working on sports games. This may seem significantly different from a live service game like SWGOH. But, like Galaxy of Heroes, sports games require a long term plan that evolves based on player feedback. I also have a passion for role playing games and developing RPG’s formed the foundation for my early career in games. In general, every new game and game team I work with proves to be an opportunity to learn about the craft of developing games. I am confident the same will be true for Galaxy of Heroes.

What squads are you working towards right now?

MD – I recently worked through a Padme team and then the Geonosians. The current squad I am working on is the Jawas. But a lot of my effort is going towards improving squads for the Geonosian Territory Battle.

Who is your favorite character or kit?

MD – Historically, this has been Asajj. Lately, I’ve been getting a lot of pleasure running through Carth squads with Shaak Ti. This is almost as much fun as taking out First Order with Ewoks.

Shifting gears a little bit, I’ve heard that you are a huge fan of cooking, what do you like to cook?

MD – I enjoy preparing a lot of different dishes across many varied cuisines. I have to say this includes a lot of chicken cooked in a lot of different ways. My latest of these was a spicy Haitian chicken dish. However, my strongest Huaraches food  related passion is for making bread.

Outside of video games, are there any other professions you’d be interested in exploring?
MD – Hands down, my second chosen career would be as an artisanal breadmaker.

What profession would you definitely not like to do?

MD – Construction worker. I tried it when I was younger, and I broke more things than I built.

Ok, back to games for the last question: What kinds of games do you play besides SWGOH?
MD – I particularly enjoy games that tell stories or allow me to tell my own stories. This spans many genres.