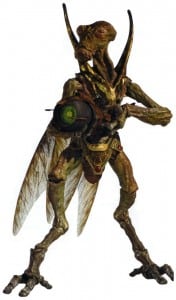 An insectoid species divided into castes, the Geonosians are native to the harsh rocky world of Geonosis. Geonosians construct immense, organic-looking spires within which reside their hive colonies. There are two main types of Geonosians: the wingless drones that mostly work as laborers, and the winged aristocrat, which includes royal warriors serving as scouts and providing security to the hive. All Geonosians have a hard, chitinous exoskeleton, elongated faces, multi-jointed limbs, and speak in a strange clicking language.

Though labeled “warriors,” Geonosians do not have a standing military. They instead use their droid foundries to build armies for corporate interests wealthy enough to afford them—entities such as the Trade Federation and the Techno Union. Despite relatively simple minds, the Geonosians are adept at mechanical construction, and are contractors to many of the galaxy’s biggest manufacturing concerns. They are responsible for the construction of some of the largest feats of engineering ever witnessed.

The hardships of the native environment coupled with rigid structure codified in their caste society has fostered a barbaric side to the Geonosians. Their simple minds view brutal violence as entertainment, and Geonosians congregate in massive execution arenas to watch victims doomed to die by being subjected to savage creatures.

Geonosian society exists for the benefit of the few in the upper caste. Ruling members think nothing of forcing thousands of workers to labor for their whims. They have overseen the creation of the spectacular architectural realm in which they all live, adapting forms they once built by instinct into more refined, spire-like structures. Their caste system has evolved over millennia. Geonosians are born into specific castes divided along the lines of their physical attributes. Though most Geonosians are content to live within their assigned castes, a few develop ambition and aspire to ascend socially. The aristocrats are brutal in their management of the workers, forcing them to toil under harsh conditions regardless of any dangers.
What little hope an aspiring Geonosian has lies in escape through gladiatorial combat. Geonosians of lower-caste are often pitted against other Geonosians, other sentients, or savage creatures in immense gladiatorial arenas. If the Geonosian surivives, he achieve status and ascends socially, or accrues enough wealth to leave Geonosis altogether. 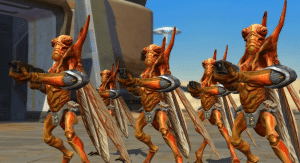 Even those with the capacity to depart rarely leave Geonosis. The importance of the hive is strongly engrained in the Geonosian mind, and they are, as a whole, contemptuous of other species. The few that have ventured offworld usually do so as work groups that ultimately benefit their home hives. Geonosian contractors can be found at Baktoid Combat Automata plants across the Rim.

The winged Geonosian soldier drones grow to adulthood rapidly, and are ready for combat at the age of six. While they have intelligence enough to defend the hive from natural predators, they prove easily conquerable by more sharp-witted foes.

The latest Geonosian subgroup is a separate caste raised to be pilots. These hardy specimens require no sleep. In training, each pilot pupa pairs with a fighter’s flight computer, and they develop an idiosyncratic, coordination-enhancing rapport.

Geonosians are strong despite their thin builds. Their tough exoskeletons provide protection from physical impacts, and from bouts of radiation that occasionally shower their world.