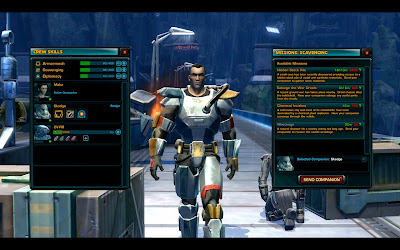 Developer commentary on crafting changes that just went live on the test server, as well as hints at what to expect from patch 1.2 can now be found on the forums. Georg Zoeller popped in to explain a few things about crafting, upcoming changes to the crafting systems and more.

I wanted to drop some notes on the changes made to the BioChem profession in the patch (1.1.2) that just went onto the Public Test Server, how they fit in the big picture and how we are proceeding forward with crafting professions in endgame in general.

It is our intention to gradually, over multiple patches, reduce the impact of situational consumables on endgame combat resolution and shift the factors which determine the outcome of combat more towards personal skill. As part of this effort, specifically for PvP, we are also working on changes that will reduce the gear related power difference between new characters at level 50 and players in full PvP gear. We feel that at the current time, this difference is too high.

He says that there are major changes planned for the next big patch and that over time, the goal is to mold the SWTOR game economy to a more player-driven model. They have many improvements in the hopper already but as always, we’re invited to share our opinions and ideas.