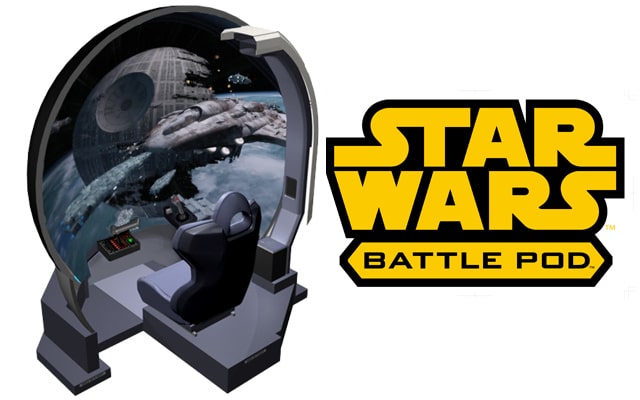 The official Star Wars Youtube channel posted a video called Star Wars: Battle Pod – From Concept to Cockpit. The video goes behind the scenes of Star Wars: Battle Pod, a new arcade shooter from Lucasfilm, Disney Interactive, and Bandai Namco, in this special video from StarWars.com.

Star Wars: Battle Pod, with an enveloping dome screen, air blasts, and rumble, redefines the Star Wars arcade experience for a new generation. The first Star Wars game ever was an arcade shooter, released in 1983, and many other Star Wars arcade games followed through the years — Star Wars: Battle Pod hearkens back to that tradition. “We’re going back to our roots, so to speak,” says Lucasfilm’s Matt Shell, “in developing this really exciting arcade unit.” The game takes players through the original Star Wars trilogy, from the Battle of Yavin to Endor, with some surprises along the way. Combined with the cabinet’s features, it’s an experience that can’t be replicated easily. “You can’t bring an experience like that home,” says associate producer Derek Williams.