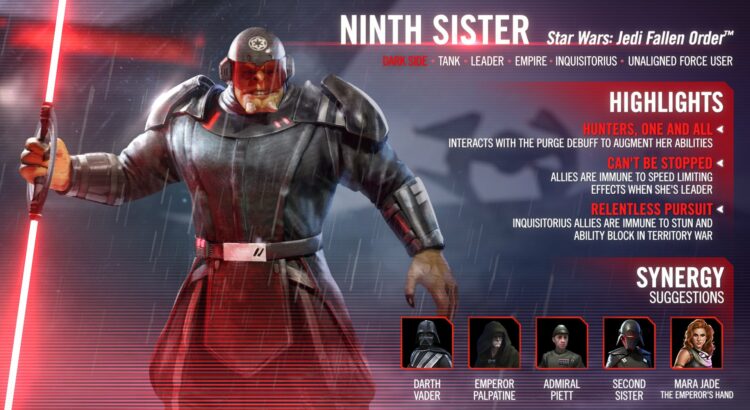 The guys over at Capital Games has posted a new developer insight. This time they are talking with the designers of The Ninth Sister, formerly a Jedi known as Masana Tide, is coming to the holotables to reinforce the Inquisitorius!

Below, we take a dive into the developers’ motivations and inspirations while creating the kit for this fan-favorite Jedi: Fallen Order character.

UNIT NAME: Ninth Sister
ALIGNMENT: Dark Side
CATEGORIES: Tank, Leader, Inquisitorius, Empire, Unaligned Force Userr
A ruthless member of the feared Inquisitorius who will stop at nothing in her hunt for the Jedi.

Special 1: NOT WORTH MY TIME (Cooldown 4)

Leader: CAN’T STOP THE EMPIRE
FINAL TEXT (ZETA/OMICRON): Allies are immune to Speed limiting effects. Whenever an enemy gains bonus Turn Meter, all Inquisitorius allies gain 2% Potency and 2% Tenacity (stacking) for the rest of the encounter. If that enemy is a Jedi, they have a 50% chance to gain a stack of Purge (max: 6) until the end of the encounter.

While in Territory Wars: All Empire allies gain 20% Defense and all Inquisitorius allies are immune to Ability Block and Stun.

Unique: IT’S JUST A SCRATCH
FINAL TEXT: For each other Empire ally present at the start of battle, Ninth Sister gains 5% Defense, Max Health, and Tenacity; these effects are doubled for Inquisitorius allies. Each time another Empire ally is damaged by a critical hit, she gains Taunt and 50% Critical Avoidance for 1 turn, and Empire allies gain 20% Critical Avoidance for 1 turn. If the ally is also an Inquisitorius, Ninth Sister recovers 5% Health.