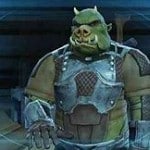 Short, squat humanoids, Gamorreans are easily identifiable by their greenish skin and porcine features. On their home-world, they live in clans, where the male boars serve exclusively as warrior while the female sow tend the day-to-day affairs like farming, raising young and crafting weapons.

Known for their physical strength and endurance, Gammoreans are generally considered a species of below average intelligence. Unable to speak Basic because of their physiology, most Gammoereans are still able to comprehend it and find a place in the galactic community as soldiers, guard or mercenaries. Due to their reputation for violence and brutality, they are often employed by crime-lords, gang leaders and various other criminal elements.

The porcine Gamorreans tend to be heavy-set and stocky, standing about 1.8 meters tall and weighing in excess of 100 kilograms. Most tend to have green skin. Underneath their pig-like snouts, protruding from jowled cheeks are yellowed tusks. These complement the small, yellow horns the Gamorreans have growing from the top of their heads. Jabba the Hutt was known to use dim-witted Gamorreans as enforcers and bodyguards.

From the planet Gamorr, the Gamorrean species consists of brutish, porcine humanoids who maintain a feudal level of technology, and tolerate a remarkable amount of violence in their everyday activities. Interstellar procedures programs for visiting Gamorr consist of one line: DO NOT VISIT GAMORR.
The Gamorrean culture is filled with bloodshed and constant wars. Gamorrean females (sows) are the productive members of their society. They own land, weave, hunt, cook, run businesses and manufacture goods. The males (boars) spend most of their time training for and fighting wars.

Gamorreans live in clans, and these clans are the basis for their wars. Clans are ruled by clan chieftains, or warlords, and a council of females, called matrons. Clan females are all related, and can trace their ancestry to a common matriarch. A Gamorrean clan typically consists of about 20 sows and 50 boars, but these numbers vary widely.

Gamorrean males come in four basic varieties. The first, the warlord, is the most powerful boar of a clan, married to the clan matrons. The greatest warlord of a clan acts as a general to all war affairs. Clan boars are the married boars, respected due to their wife’s income. Household boars, or tuskers, are unmarried boars that are hired into a clan. Finally, veterans are retired Gamorreans—usually sedentary due to some maiming injury or similar. Veterans typically act as advisors to warlords.

While Gamorreans have been introduced to modern blaster and weapon technology, they prefer to hack and slash with axes, swords and maces. They only use blasters and such when off-planet. While many Gamorreans understand alien languages, their voice boxes permit them only to speak in their native tongue of grunts, oinks and squeals. 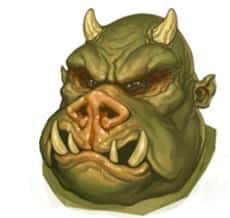 The Gamorrean year is dominated, culturally, by the turning of seasons. Spring is planting season for the sows, and training time for the boars. Local fairs serve as places for sows to trade and boars to compete in semi-formal personal combat. Summer is for war. While the boars rush into combat, the sows stay protected in their fortresses. By autumn, the clans have spent most of their strength. Sows harvest the crops and tend to the wounded. The harsh winter can sometimes push a suffering clan to the brink of starvation, forcing them to raid other clans. Successful clans enjoy a period of peace, and the warlike boars become quite docile—some would even dare say romantic—during winter.

The Gamorrean diet consists mainly of fungus, of which a startling variety grows on their homeworld. Snoruuk, a species of mobile mushrooms, forms the staple of the Gamorrean diet.

Gamorr is also home to a parasitic species of bloodsuckers called morrts. Gamorreans have great affection for these creatures, finding them cute and cuddly. The number of morrts feeding on a Gamorrean is a symbol of status among males. Warlords and clan leaders can have up to 20 feeding on them at a time. Gamorr is also home to an impish mammalian species called quizzers, which the Gamorreans hate with a passion. All attempts to exterminate the playful pests have met with failure.

Many off-world Gamorreans are employed as mercenaries and enforcers. Gamorreans will work for anyone if the pay is good, but according to tradition, they will not work for anyone who can’t best them in combat. A large off-world Gamorrean population can be found in the Elrood sector, particularly on the planet Lanthrym. In this area of space, the derisive term “Grunt” is often applied to Gamorreans, but rarely to their faces. 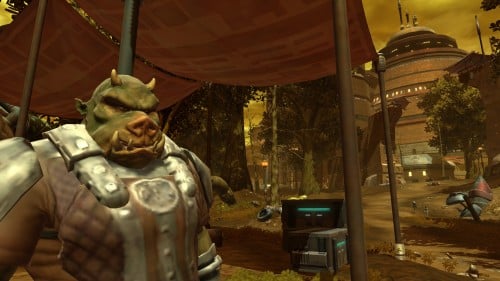 One thought to “Species of Starwars: Gamorrean”