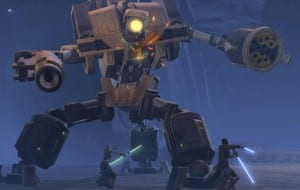 “Ugh this is impossible!” I heard over the vent channel.
“What’s impossible?” I was curious, what
“This damn OPS boss!” I chuckled.
“What’s going wrong?”
“Everything!”

Welcome back to another intergalactic Intel! Sorry for the lack of articles, I’ve had a busy past few weeks! If any of you remember, one of my original posts was about raiding. How to become one, and how to do well.  Recently I’ve been looking at a bunch of posts on Diablo 3 boards, The Old republic and World of Warcaft boards about bosses.  These posts have inspired my next set of articles, the Art of Raiding. I’ll go over, how to build a raid group, leading, tanking, dpsing and healing raids. Today’s is probably the most important one of all. Analyzing fights.

Every fight is unique. Only because one fight has a similar mechanic doesn’t make it any easier. Each new encounter is like a puzzle. Figuring out each part of the fight is like a puzzle piece once you have it  Make sure you have your battle log running so you can go back and check to see what’s happening throughout the fight in a closer manner.  When walking into an unknown fight it’s best to start slow. Have your tank pull with your back up tank right behind them in threat. Have healers assigned to tanks and the raid. This is a basic setup. Try not to pop any cool downs for you may be unsure of what will come later.

While watching the fight keep an eye on any debuffs your tank is receiving and any buffs the boss has. See if the boss has any abilities that can be interrupted. Let each of the bosses abilities go off to judge damage and effect.  Feel free to step in a nasty AoE patch just to test the waters. Some AoE patches may seem nasty, but can help make the fight a little more manageable, by removing debuffs, or granting increased damage.

If the boss spawns adds, do the same as what you’ve done for the boss. Let them deal damage to the raid, allow abilities to go off, check buffs and debuffs.

After you understand how the boss functions it’s time to classify the fight. I classify fights into these four different types. A dance, a healing check, a DPS check or a tank check.  The first three are the most common with the fourth being the least common. Fights can have multiple classifications, but for the most part will have one clear cut classification. A dance fight doesn’t require a large amount of gear, but for players to be mobile and achieve a certain aspect in a fight. The Ancient Pylons fight in the Eternity Vault is a great example of a dance. The fight doesn’t require too much healing, tanking or dpsing, but requires the group to solve a puzzle and coordinate properly.

A healing check usually is probably the hardest in my opinion. Healing checks require your healers to be skilled and geared. These fights usually have the raid taking tons of damage from AoE attacks. The raid needs to know when to pop defensive cool downs and prevent as much damage as possible during these encounters. Once healers have out geared and have the experience of the fight, healing checks tend to be very easy.

A DPS check can be two things. The first is when a fight has something that puts the team of a timer. A room filling up with a debuff, an enrage timer, or having to DPS a specific target at the right time.

As I stated earlier tank checks are the rarest of all the encounters. Usually these type of fights cause tanks to take massive damage and work on mitigating it by swapping between tanks and pressing cool downs are the right moments.  I personally haven’t found a single encounter in The Old Republic to be a tank check yet, which is great because I tend to find these types of fights very frustrating.

So we’ve got the fight categorized, we know the bosses mechanics, but what happens when things go wrong? People are quick to point fingers, “Well the DPS didn’t stand in the right place!” “No, the tank is taking too much damage!” It’s not un common for fights to end poorly at first. It may take your team up to 10 to 20 attempts to down a powerful boss encounter. Don’t get discouraged!

When a fight goes wrong you need to stop and analyze it just like you did with learning the boss. I usually ask these questions in this order:

1). Is there something wrong with our strategy?

What works for one guild doesn’t work for another. Simply because the most main stream strategy isn’t working doesn’t mean you can’t complete the fight. Tackle it from other angles. Create your own or research another.

2). Are we executing it properly?

Sometimes tightening up your strategy makes everything way easier.  Just tweaking who is healing who, or who is dpsing what might fix your problems.

This where we can begin examining our players. Did healers do poorly? Are we hitting the enrage timer? This is where you have to check your battle logs. See who isn’t picking up the slack and who could be doing better.

5). Did the developer screw up?

This is the final and last question you should ask. These kind of fights are mechanically impossible. I’m not talking about fights that need you geared to a T, but fights that cannot be completed. So far in the Old Republic this hasn’t happened, but in World of Warcraft fights like C’thun back in classic wow, was impossible until Blizzard patched in a change.

Well that’s it for analyzing raid bosses. Next week we’ll go over what it takes to be a raid leader. Until next time, may the force be with you!