It was supposed to be yet another Xenoanalyst hard mode operation for the Gree World event that ends soon… Most of the Alpha Strike Force (ASF) guild group had never done this fight before and was in the process of  figuring out its mechanics. The operation was on its third try and controlling the additional monsters (i.e. adds) attacking the group during the main fight was becoming the main challenge.

As you might read in walkthroughs and guides, controlling the adds becomes a crucial element of this particular fight. The group is required to finish them off quickly, while the tanks need to do an extremely good job keeping aggro away from the healers at all costs. Being already exposed to this mechanic, ASF was really focused on getting through this phase as quickly as possible.

To everyone’s surprise though, the regular monsters that the group came across on its previous two encounters simply didn’t show up… Instead, a group of armed Jawas attacked and while the encounter was surprising it turned out to be a lot more easier than before. Eventually the operation ended successfully.

At the end of the day, nobody knew whether this is was feature, a bug or yet another Easter Egg. One thing is certain though…  everyone enjoys small surprises like these, especially when these involve Jawas! 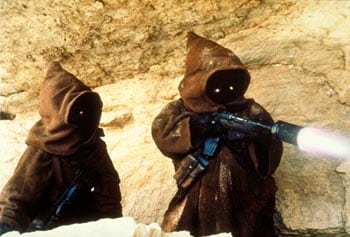