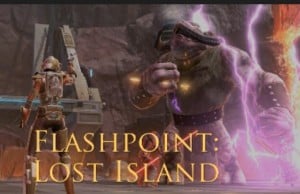 The Lost Island is the new Flashpoint in the Game Update 1.2. If you haven’t had the chance to check it out yet, try to get yourself in a group after you read this guide (so you know what you’re doing). It’s open to both factions and it also has a normal and Hard Mode for level 50 players. It’s a lot of fun and I really like the story that is involved as well.

In the story of the Lost Island, we are taken to a hidden island on Ord Mantell where we are called to end experiments by Mad Doctor. So anyway… what’s this Flashpoint all about and how do you succeed in it?

First, be aware that this is a Flashpoint full of encounters that require you to move a lot. You want to be ready to move in any instant and don’t just stand around staring at your keys or you’re going to end up dead and possibly wipe the whole group.

Here are some additional details on the Lost Island:

Flutterplume Plaguebearer is a mini boss lvl 50 champion with 48,975 hp, immune to stun effects. This boss has two abilities:

Transgenic Sample Seven is a lvl 50 champion with 17,393 hp with one ability:

Transgenic Sample Eleven is a lvl 50 champion with 213,134 hp and two abilities:

Doctor Lorrick is a lvl 50 champion with 244,102 hp and several abilities:

General tips: Healers time your heals accordingly. Remember for long cast heals that you have to cast and move. Tanks need to use defensive cooldown skills and melee needs to pay special attention to their positioning.

One thought to “The Lost Island Flashpoint Guide”