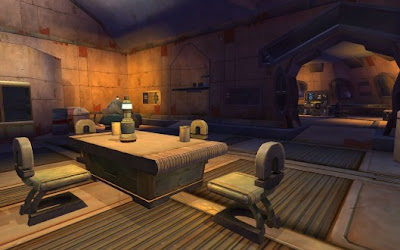 Gamespot is present at this years EA Winter Showcase in England. Earlier this morning they published an interview with Blaine Christine and Gabe Amatangelo from Bioware about crafting, collecting and PVP.

Here is a snip of the crafting part:

The crafting and collecting, for starters, is designed to fit the player’s experience in a way that is credible in relation to fiction. As Christine puts it, more or less, it does not make sense for a badass Darth Vader-like Sith skin WOMP rats in a new pair of boots in between conquering worlds. And yes, the coherent fictional basis for the low, the crew skills system. “You are the hero,” says Christine. “You make your crew work for you.”

The crew consists of companion characters work as you play with your spaceship as their base of operations. From the ship, your comrades sent to collect materials and commanded to crafts while you go about the business of being, for example, a Darth Vader-like Sith badass. These crew instructions may also be radioed back to the ship while you’re planet side (we saw companion characters working over a spaceship workbench in the presentation) and crew members to join you while you quest. They might collect materials as you ward off enemies (we were shown a shot of Twi’lek character Vette foraging for materials, while the player character fought a non-player character enemies).

Of the four gathering skills to be included in the game is bioanalysis – obtaining information, forms, and raw materials from living (or dead) creatures. With recipe-like, will companion characters able to produce useful set for you with one of the crafting skills, Biochem, they can craft stimpaks, adrenals, and implants that provide benefits for your protagonist. Alongside gathering and crafting skills are mission skills. For those touched by Christine on diplomacy and treasure (one of Vette specialties as a Twi’lek pirate). With the latter, you can send henchmen out on errands to collect tax, while diplomacy missions, for a dark-side character, involves having crews do your evil bidding and spread your evil influence across the galaxy. For these tasks (ie, bribe a senator), you can be rewarded with a shift in your light or dark-side alignment.

The crew can also perform this gathering, crafting and bad deed while you are offline, there is progress both in Games time and in your downtime so you can queue tasks. When you return to the game, you’ll find your treasure hunting and boots designed, for example, if sufficient time has elapsed. It is an interesting solution to the traditional grinding in massively multiplayer online role-playing game business systems.

Gamespot also included a video interview with Lead PvP Designer at BioWare, Gabe Amatangelo. It contains mostly of info regarding the Alderaan Warzone… Check it out below.

I like the way Warzones are sounding… I never really enjoyed big group PvP but it sounds like the way they are implementing it could focus it pretty well into a team based operation.

Crafting I’m kind of worried about. I like gathering materials… I understand the whole heroic thing, a super cool adventurer not gonna bother picking flowers, but that just kinda makes me feel like a douche. Like I’m too good to Bioscan some dead beast but it’s ok if my companion does? Sure it’s convenient but I want to feel like I actually did something at the end.

Whenever I would make something really amazing in WoW I felt a big sense of accomplishment. My Flying Machine for example. I farmed all the materials, I went and looked myself for all those nodes. And for what little stuff I couldn’t find I paid for with my own gold. Then I whipped it up and voila, something I worked on and was truly mine. Sure it may not be “heroic,” but not everything has to be so bombastic. Is there not heroism in doing simple tasks for a good cause? Is that not part of a hero’s journey? Is it heroic to shrug off manual labor on those following us?