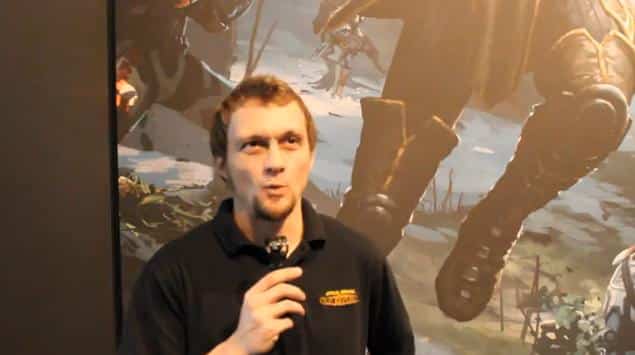 SWTOR Life visited Gamescom this year and also had the great opportunity to interview Principal Lead PvP Designer Gabe Amatangelo about SWTOR. We have seen other interviews with Gabe but it’s always great to see what else he will say and do.

Here some info from SWTOR-Life about the interview and then check out the video below to see it all for yourself:

“”The first booth I visited at Gamescom this year was Star Wars: The Old Republic booth. I was curious as to what will I find there. What I found were people playing the new warzone Ancient Hypergates and, to my surprise, Principal Lead PvP Designer Gabe Amatangelo himself chilling and waiting for the press to come. I spent more than half my time in SWTOR playing PvP on the maps this man designed so I opened with: “You ruined my life by wasting sooooo much of my time”. He did not take offense. Instead we chatted for quite a while and did the interview you can see below. I took the opportunity to ask him some of the community questions related too PvP and we discussed why Guild Capital ships, same sex relationships and ship customization is something we still do not have in SWTOR.

P.S. There is a portion of the community that seems to have some beef with Mr. Amatangelo. Doing this interview was the most pleasurable interview I ever had in SWTOR. Mr. Amatangelo was very relaxed and upfront about everything we discussed. There was no sense of having to hide anything like we always had with so many other SWTOR people. It was just a friendly discussion about the game he helped make. Besides, more than 50% of players take active part in PvP he designed. I would not call that a failure. So, cheers Gabe. You’re the man!”

We agree- Gabe is pretty awesome. So go ahead and check out the video for yourself and let us know what you think.