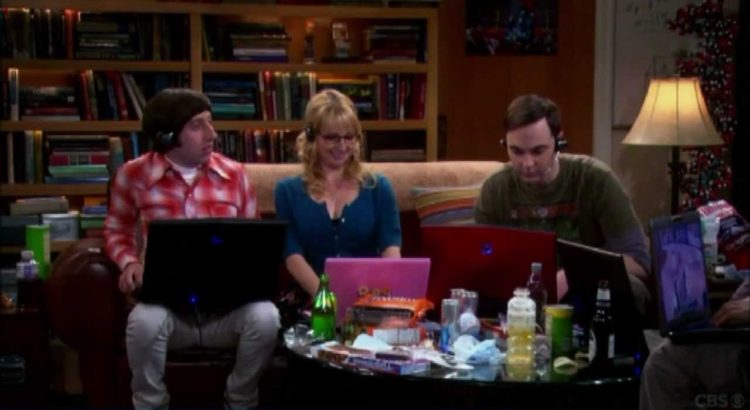 If you’re a fan of Big Bang Theory, you may have noticed that one episode (S05E19) where the gang all played SWTOR.

In their usual hilarious manner, the gang talked “nerdy” about “that new Star Wars game” and the other games they had played in the past (remember when they played WoW?) And of course, the girlfriends didn’t understand, although Bernadette jumps in with her pink laptop to play their healer (stereotypical, but still good for a laugh).

Anyway, most of it is just reference to the game, which they never actually call by name, except for one scene on Raj’s screen where we actually get to see them play.

SWTOR fans have criticized this clip every time it gets brought up but I think it’s all in good fun and one player commented on a thread that he found out about the game because of this episode! I doubt he’s the only one, and I consider that a win if it was introducing new players to the game.

If you’re also a fan of SWTOR, you may have noticed some things seemed odd on Raj’s screen. For one, they weren’t grouped up, Raj didn’t have this companion out and it looked especially empty on Coruscant that day. People also criticized how they were playing without a mouse, but it’s an MMORPG, not an FPS and I know a lot of people who play that way.

However you feel about it, I’ve stumbled upon some really fun info about how this entire seen was shot and I think you’ll like it. First, let’s refresh what took place on the show.

Here is a compilation of all the times SWTOR was mentioned in The Big Bang Theory if you want to see for yourself.

If you didn’t watch the show, then have a look at the clips to see for yourself. If you did watch, it’s a fun lookback with some additional insight into how it all happened.

Someone on Reddit who goes by Redcrosse says that he actually filmed footage for that episode when he worked at BioWare. He explains a lot of the things people had criticized, and some other background info, too.

Here’s what he said:

“I actually filmed the footage for that episode while I worked at BioWare. It was a super weird one-off request! The show’s producers had very specific requests, from the location to the race/gender/outfit combos the characters would wear. Each player was roughly built to look like the characters on the show. We weren’t told how exactly the footage would be used, but we had a vague idea of what the episode was about. If I recall, we were told Bernadette was supposed to pick up a new pretty outfit and was to be more interested in dressing her character than fighting, but I’m not sure if they kept that storyline or not.

The companion wasn’t out because it might have caused confusion as to which character on screen was being played by each of the show’s cast members. The other Jedi was probably an NPC that was dressed to look like a player character. Our team of video editors was small, so we’d often have to film multiplayer footage solo, so NPCs came in handy. We did have a second machine we could use for group shots, but it’s been so many years that I can’t tell you exactly why we shot it without the party UI up, but I bet it was requested that way. The zone’s player count in the top left is probably an oversight – we couldn’t film on a live server since we needed cheats, and we’d often fix things like that in post, but since the footage was basically delivered raw to the show’s producers, we probably never got the chance.

Fun fact – we also sent them a collector’s edition and some other SWTOR swag, and some of it was visible in the background in at least a few episodes!”

Regardless of whether or not you were a fan of the show, I think it’s really fun to see games like this show up in the mainstream and popular culture. The more recognition they get, the more players they get, and the more games like this we get to have – and keep.