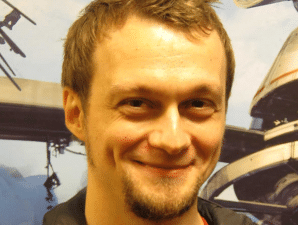 During the first day of GamesCom, DarthHater had the opportunity to get a quick interview with BioWare’s Gabe Amatangelo. Since it was short, they focused on some of the key areas that BioWare has presented at the event – Ancient Hypergates Warzone, future Operation content, and more.

It’s a fun interview and I always like hearing from Gabe. The DH crew know how to ask just the right questions, even when pushed for time and they know how to try to dig up those little pieces of information we don’t already have (whenever an interview subject is willing to give it).

Here is a snippet of that interview:
First of all, you’re showing Ancient Hypergates at GamesCom right?

It’s the first time for many of the fans seeing it so it’s somewhat of a mystery. Give us the general idea of the Warzone and its gametype if you can.

So the Gree technology, you know the Gree race, they are sort of a super-advanced technological race. They have these things called hypergates that allow quick travel from the far-reaches of the galaxy, uncharted areas in the universe, etc. And actually the next Op we have coming up ties into this as well. So, both the Empire and Republic are trying to get control of one of these hypergates, and the idea is that there’s these two pylons on the map, and if you get control of both of the pylons, they will channel energy into your hypergate to try to charge it up. The first person to charge up their hypergate, their fleet can come through. And when their fleet comes through, they annihilate – they finish off the other team, and you win. That’s the idea, that’s the sort of context of it.

They go on to talk about getting kills, ranked PvP, questions about free to play and how the game will change and what limitations on PvP there might be for free to play players.

Read the full interview from DarthHater from their website.