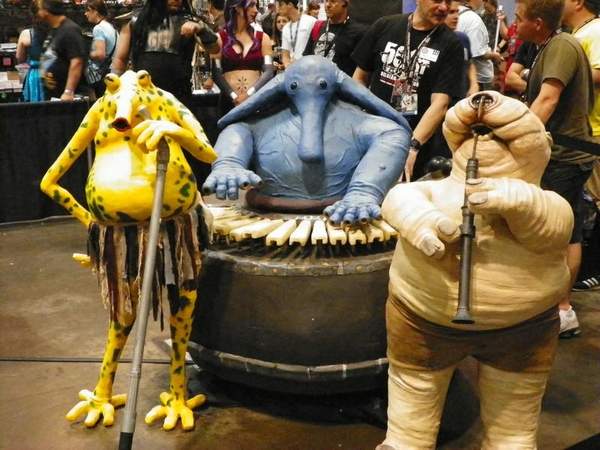 The biggest “Star Wars” party this side of the galaxy continues this weekend in a city not far, far away from Brevard.

“Star Wars” fans young and old are in for a real treat as Star Wars Celebration VI returns to the Orlando Convention Center. Carrie Fisher, Mark Hamill, Seth Green, Dave Filoni and Kevin Smith are among the guests, along with the many fans emulating C-3PO, storm troopers, Darth Vader, Princess Leia and Han Solo.

For David White of Titusville, a member of the Mandalorian Mercs, which celebrates the subculture of “Star Wars” bounty hunter Boba Fett, the celebration means a chance to don his costume for a good cause.

His group will host a jail and bail event in which the Mercs arrest or release folks, with proceeds going to charity.

“The last celebration, we only ran it for six or seven hours on one day, and we raised almost $500. This time we have three jail cells, we’re running it Friday and Saturday from 11 a.m. to 5 p.m., so we’re hoping to raise a lot this year.”

Outside of wearing “Star Wars” T-shirts, Jimmy Rogers of Titusville doesn’t dress up, but he has a series of tattoos on his left leg featuring major players from the movie franchise. He’s a fan for life.

“It’s about embracing your inner geek,” Rogers said of the tattoos. “You either go all in with it, or you don’t do it at all.” He has a storm trooper covering his knee, Darth Vader on his shin, the Emperor and Han Solo in his frozen state.

“It’s the same thing when you’re wearing the costume,” White said of reactions to his homemade Merc costume. “When you put on a helmet and you put on this amount of armor, it takes you almost an hour because you have to stop every three or four seconds because people want to take your picture.”

The kid-friendly convention continues through Sunday. For more information including bios, a breakdown of games and features offered there, call 888-334-8719 or visit starwarscelebration.com.