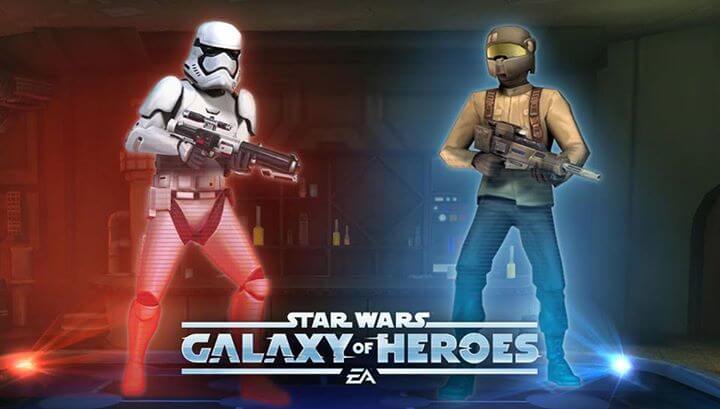 Here is the latest developer blog from the guys over at Star Wars: Galaxy of Heroes. This one is addressing a lot of questions people have asked, and clarifies the character release cadence and explains the details of Marquee events.

Recently Carrie introduced me as Nick Reinhart in the Developer Q&A, but you all know me more commonly on the forums as CG_TopHat. I’m the Live Producer on the team which, admittedly, sounds like a made-up job.

We also schedule the majority of stuff on a monthly basis and we’d like to update and clarify a few things around the character release cadence, as well as Marquee, Legendary, and Hero’s Journey events and how you’ll experience them. We know these events are important to you and that makes them very important to us.

Marquees
It’s been a little over a year since we first unveiled the Character Release Cadence for Marquee events (here). It was quite literally something I wrote my first week on the job as the Live Producer, so it’s incredible to look back on it and see how far the game and the community has come since then. Who would have thought a year ago that Darth Sion, Mother Talzin, and Commander Luke Skywalker would make regular appearances on the Holotables?

More importantly, we, as a studio, wanted to take an opportunity to recommit to a regular movement of characters from packs to grindable locations in the game, and to reflect on the intent of the Marquee events. We also wanted to expand our original model to include some additional details on things that will remain constant.

Finally, we wanted to acknowledge that we made a few missteps in delivering this cadence. I’m going to make it my mission to make sure we are clearer about our intentions and that if, for any reason, a change needs to be made to this cadence, that we will give you all advance notice.

Marquee Event Intention
Originally, our intent with Marquee events was to give new characters a more flashy entrance into the game, bring more characters into the game more regularly, and put them in the players hands as early as possible.

Whether a player buys packs, picks up shards in shipments, farms characters on nodes, or puts them on the back-burner, we want you to have an increasingly clear view of what each new character contributes to their overall experience and set of goals, over a long, enjoyable period of time.

The overall cadence we laid out last year will largely remain intact with a few minor updates. However, we’ll restate it here with the updates for clarity.

We have content releases approximately every two weeks. Our goal is always to release units as close to their landing date as possible and keep within the spirit of the cadence. If you haven’t seen it at the six week mark it is likely coming in the next release.

Since they were introduced in February 2017, Marquee releases have been integral to the long-term stability and richness of Galaxy of Heroes. In our quest to continue making the game bigger and better, we’ve experimented with the format and its purposes. In the interest of transparency, we’d like to communicate that this period of experimentation with the format is over.

Fundamentally, we’re at the point where we’d like to come to you the players and “cement” what a Marquee event is so that you have a good idea of what to expect and can make informed decisions on the new characters being introduced. Marquee releases of new characters and ships will now follow the below parameters:

We are also looking into potentially finding a way for new players to experience the content we’ve built in Marquee events as they begin their journey in Galaxy of Heroes.

Legendary and Hero’s Journey Events
Over the last year, we doubled the number of Legendary events in Galaxy of Heroes with the addition of R2-D2, BB-8, Grand Admiral Thrawn, and Chimaera. We’ve also begun introducing the Mythic version of these events, giving players a chance to earn late game rewards and relive some of the best moments in Galaxy of Heroes. We’ve also added our Hero’s Journey events introducing Commander Luke Skywalker and Rey (Jedi Training) into the Galaxy as well. These events rotate in and out of the calendar on a regular basis and we are well aware that the players are keen for some clarity on when to expect to see these events and what sort of lead up they will have to prepare for them.

Inside of the studio we have a concept of “New” events and “Legacy” events. This applies to all matter of event types for us – Assault Battles, Fleet Mastery, Omega Battles, etc.

Similar to Legendaries and Mythics, we have a concept of a New and Legacy Hero’s Journey.

I also wanted to clarify how we’re going to tackle the monthly updating of the Event Calendar. We’ve been in a rhythm of posting the next month’s event calendar near the end of the current month.

We’re going to stick with that cadence and with the current fidelity of information we are currently posting, with the addition of the Legacy Legendaries and Mythics. We’ll also be adding New Legendaries, Mythics, and New/Legacy Hero’s Journey events to it a week before they arrive.

We hope this blog helps clarify our intention around these important events and better informs when you will learn about their return. More than anything, we want to keep bringing you great stuff. Characters, events, raids, you name it. And we want you to feel like you know when you can expect that stuff to return or how you’re going to get that stuff when it comes around, whether it’s the first time or the 100th time. Hope this helps you plan your game better!

Thanks for your passion, and dedication, and sometimes righteous indignation.