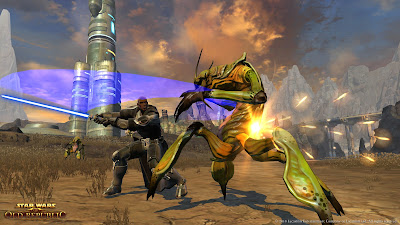 This weeks friday update gives us another developer blog. This time it’s Live Producer for Star Wars: The Old Republic, Blaine Christine that shares some insight about his job.

Blaine Christine has worked for BioWare for three and a half years and mainly take care of beta testing stuff right now. I imagine he is the last man who have a look at things before new patches hits the test realms etc.

Thorugh out this weeks blog, Blaine Christine quotes a few beta testers with their exstreamly positive (obviously) opinions on the game.

Here is the probably most interesting quotes from game testers:

“The questing experience in TOR was amazing! The voiceovers and cinematics actually make me wonder how I ever survived the ‘grind’ without them.”

“As one of those people who didn’t really care about story in an MMO, after playing TOR I can’t imagine playing another MMO unless it has as much focus on story as TOR does.”

“I’ve been waiting years and years and years for an MMORPG experience like this. The combat is incredible and never gets old. The grind is gone. I am so happy the grind is gone (so, so very happy). The stories are fantastic, well written, well acted, well animated, incredibly immersive, and the inclusion of choice takes it into territory that other MMOs have only dreamed of. Lastly, this game makes you feel like a bad***. The entire time. And I love that.”

Funny how the above quotes are excactly the same as all BioWare folkes have been saying over and over…. Anyway, you can read the whole friday update here.

This week’s blog was originally intended to be part of next Friday’s update. We ran into some unexpected issues finalizing this Friday’s originally scheduled content, and so chose to move that content out to next Friday. As a result, next week, you’ll get an update-and-a-half… and then after that, you’ll soon see the cool stuff we’ve all been hard at work on for PAX East.