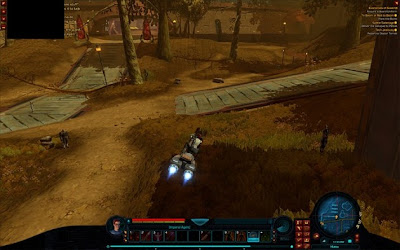 Speeder bikes and swoop bikes are small, fast transports that use repulsorlift engines, usually carrying one or two passengers. Speeder bikes emphasized speed and maneuverability over conventional speeders and were popular with thrill-seeking teenagers and military scouts. A typical speeder bike had a maximum altitude of 10 meters (32 feet) and could thus maneuver deftly over very rough terrain. Some companies manufactured extras like sidecars for speeder bikes.

The lightweight bikes can usually attain speeds in excess of 500 kilometers per hour. A quartet of small directional steering vanes on twin outriggings afford the speeder its maneuverability. The Imperial biker scouts from Return of the Jedi used two shoulder-level handgrips to control elevation and direction; a pair of rocker-pivoted pedals controls acceleration. Located just fore of the speeder’s saddle is a panel of toggle switches and knobs that control communications and other vital systems. Slung beneath the speeder’s frame is a single laser cannon. 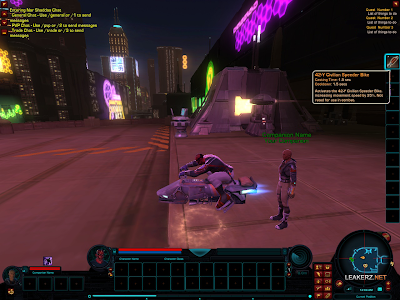 In KOTOR it is possible to drive swoop bikes as part of a mini game. In this competing swoop racers did not take to the track at the same time. Instead, each racer would race alone over a course filled with obstacles and speed-enhancing “acceleration pads”. After all racers had completed one or more trials, the racer with the best time won. Some of the earliest swoop bikes could be found on Taris.The swoop racing circuit at the time centered on Taris, with other tracks on Nar Shaddaa, Onderon, Telos IV, Manaan and Tatooine. Most famously, Revan competed in the Taris circuit shortly before that planet’s destruction; using a modified swoop to gain the fastest time.

Many planets, such as Tatooine, had an amateur track. The track coordinator there was Motta the Hutt. The award for victory was usually valuable “race bonds” which could be later sold.

Though its hey-day was during the Jedi Civil War, swoop racing was always a popular sport both on professional and amateur levels. It enjoyed a resurgence in popularity when it became the Empire-sanctioned replacement of podracing. Swoop Racing was often regarded as a safer alternative to podracing since the tracks were much less complex and the risk of injury or death was not as high as the faster podracing events. Its popularity may also have been helped by the fact that Humans could participate since swoop racing required less reflexes than podracing.

Origin and design
Various concept sketches came from producer George Lucas’ call for a “rocket powered scooter” in Return of the Jedi. While Industrial Light &Magic’s (ILM) Nilo Rodis-Jamero designed a blocky vehicle with a large engine, Ralph McQuarrie’s designs were more fanciful but with less of a sense of the vehicle’s power source. The final designs resulted both in full-scale Imperial speeder bikes used by the actors for film against a bluescreen, along with miniatures mounted by articulated puppets. ILM used a steadicam recording at 1 frame per second to record the speeder bikes’ path through the forest moon of Endor — in reality, a California forest. Playing the footage at the standard rate of 24 frames per second caused a blurring effect, what looked like 100MPH actually was shot at 5MPH , which ILM used to simulate the vehicles’ high speed.

The BARC speeder in Revenge of the Sith was designed to appear like a predecessor to the speeder bikes in Return of the Jedi. ILM’s Doug Chiang designed Darth Maul’s (Ray Park) speeder in The Phantom Menace to resemble a scythe, and Chiang’s initial designs for the droid army’s STAP vehicle resembled the speeder bikes from Return of the Jedi. An all-CGI swoop appearing in A New Hope stems from a design created for Star Wars: Shadows of the Empire, and the swoop also appears briefly in The Phantom Menace.