Do you have a friend in the SWTOR beta? It’s possible the “friends and family” beta mode may be expanding to friends of friends and family. According to a Tweet by @Kruczinski, beta testers were getting a number of beta keys to share with friends starting today. 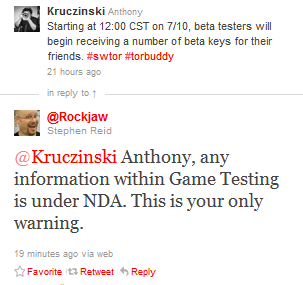 Of course, Stephen Reid (@Rockjaw) set him straight real quick with a reminder that “any information within Game Testing is under NDA” so he most certainly should not have been Tweeting about it.
Anthony then replied to Reid with:
“@Rockjaw Unfortunately, I haven’t been invited to any of the Game Testing phases which means I can’t really break any NDA can I?”
Some question the authority of his leak since his previous tweet included a racial slur and the latter tweet admitted he was not part of Game testing, therefore, may not actually have any solid information regarding buddy keys or TOR at all, for that matter.
So this could just be a case of a friend telling a friend and we know how messed up things can get as they go down the “phone tree “ process. Of course, it’s not far off to think that they would now be at the point in Beta testing to offer buddy keys. And if there is not some truth to the rumored leak, why would Reid reply to it in warning in the first place?
Reid also said later, after a barrage of tweets regarding game leaks on Twitter:
“Oh you guys… so many LOLz. All I’m saying is: unless you hear it from BioWare, don’t assume it’s truth.”
All we know for certain is that if you have a friend in TOR beta testing, it’s never too soon nor too late to start sucking up!