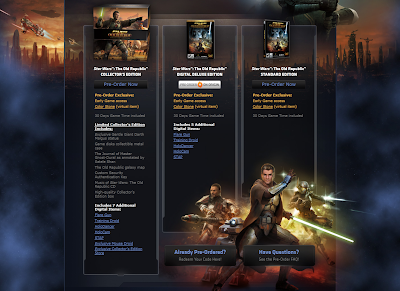 In an official press release from EA, BioWare announces beta test weekends will begin in September. It also discusses the pre-orders starting today and unveils detail of their special editions of Star Wars: The Old Republic.

“As anticipation grows, BioWare also proudly announced today that Star Wars: The Old Republic will open “Beta Test Weekends” starting this September. These weekend play sessions will be open to selected players worldwide and create an opportunity for fans to get a sneak peek of the epic stories, worlds, quests, battles and characters in the game. Please visit www.StarWarsTheOldRepublic.com to register for game testing and to stay tuned throughout the summer for more details as they become available.”
That’s exciting news for those who have been waiting for a chance at a beta that has since been closed to the public.
The press release also describes the three versions of SWTOR that will be available for release:

Just in time FTWBroadcasting has posted a SWTOR Pre-order walkthru video. In this they explain all of the features, pricing and more. Check it out below: