Today during E3, EA had an analyst event at Los Angeles. This event covered a large range of questions related to EA’s profile but as is no surprise, SWTOR had a large portion of the revenue stream for the company going forward. A lot of people have a lot of interest in the popularity and success of SWTOR, aside from just those of us who want to play. 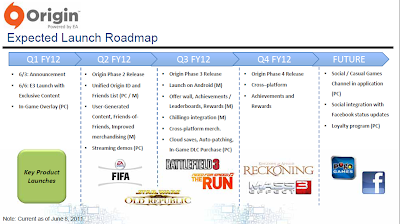 While there wasn’t really any new information released here that we don’t already know, it’s always great to know the plan is the same, and that they are on track for releasing SWTOR before the end of this year, as projected.
In the analyst call, EA’s CFO, Eric Brown talked about how the financial performance of the company is expected to be higher at the end of 2012 when TOR has had a chance to peak in performance. He also confirmed that it will only be available in digital form from their new platform, Origin. (Fans can still purchase boxed copies from retail stores).
The event also included a presentation on SWTOR by BioWare Co-Founders Dr. Ray Muzyka and Dr. Greg Zeschuk. This covered the many reasons why the game will be awesome and why they project it to be a good money-maker for the company. At the end of this presentation, the most recent game play trailer was shown and they then covered the guiding principles used in making SWTOR.
Zeschuk discussed player retention strategy which included:
You’ll be able to listen to the call for yourself once EA posts it here. You can currently download the accompanying slide presentation there as well. He closed by stating that the game was on track to be released in quality. All good news for those of us anxiously awaiting to play.