We wrote yesterday about the announcement from Razer that they will have a full line of Star Wars: The Old Republic accessories to be released when the game is released. Lucky visitors to E3 were given the chance to see these peripherals up close, although they were not allowed to physically handle them at this time.
One glaring difference between these and the photos that were released before is that they now look more white in color as opposed to silver when we first saw them. We have no real clarification at this time which color they will come in or if there is a choice. 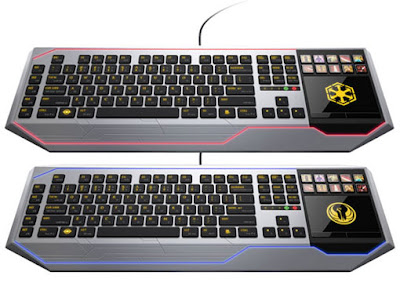 DarthHater released a video of the presentation the product managers gave on the Razer SWTOR items. Here’s an overview of the highlights of each piece:
Keyboard- Has LCD buttons that are programmable for certain in-game functions. Can assign each key with an image and assign macros (simple or complex). LCD buttons can be tiered. Keyboard has a multi-touch screen that you can use instead of a mouse if you choose. You can also choose the color you want the LED lights to be displayed as.
Mouse- The mouse is basically the Rezer Naga, which a new skin. You can choose Republic or Sith for the icon on the mouse, as it is interchangeable.
Mousepad/gaming pad- The game pad is made of metal and can be flipped to Sith or Republic side.
Headset- Headset icons can be switched to choose Sith or Republic as well. There are color changing LED lights on the bottom of the headset. It also has alerts supported by BioWare, such as to alert you of nearby enemies.
What do you think? Will you be getting one of these along with the game?

Update: Here is one more video
Razer|Maniac and Razer|Hypermecha tackle Day 1 of the show. Razer|Water gives you the lowdown on our Star Wars gear and Razer|Irokwell tells you a little about the Allegiance contest, our booth babes chime in, and we throw a little trivia competition