We wrote back in June about the rumors of SWTOR being delayed in Australia and it seems like there must be some truth to this rumor. When you go to the SWTOR Pre-Order site, as many were doing today, there are no options for Australia.

If you’ve gotten the dreaded:
“Star Wars™: The Old Republic™ is not available in your region”
Then pre-order is not going to be available in your region; at least not yet. This has some Aussies pretty upset about the news and it wasn’t long before threads were popping up about it. The biggest question from those in the limited regions like Australia, New Zealand and Latin America is “why?”
Static52 even brings us a fun little cartoon that expresses exactly how most feel about the issue. 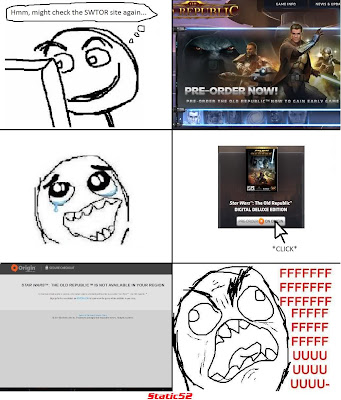 Stephen Reid, Senior Online Community Manager, came through with an official response today on the forums:
“To all of our fans outside of North America and Europe:

Today we’ve announced the pre-order details for the initial launch of Star Wars: The Old Republic, and as you may now know, we’ve taken the difficult but necessary decision to limit our initial launch supply for the game. BioWare and LucasArts are completely focused on building an exceptional game and an exceptional game service to go with it. We decided to constrain our launch capacity to ensure we deliver a great experience to every player.

Part of the reason this decision was made was because of the overwhelming demand for The Old Republic, and we’re humbled by that level of excitement and anticipation. We fully intend to deliver to you an amazing game when we expand our service post-launch, but right now we cannot commit to any timeframe for when that may happen. As soon as we have more information about additional launches in more territories, we’ll let you know.

We are committed to delivering Star Wars: The Old Republic to BioWare and Star Wars fans around the world, and to growing a truly global community.”

So… it doesn’t mean you’ll never get it but it means no pre-order and not TOR on launch. Those outside of North America and Europe have to sit on their haunches and wait for word that TOR is coming to their area?
Many TOR fans are afraid they now won’t see their own copies of the game until 2012 or later. This has many, understandably, upset.
Are you in one of the affected areas that will NOT be getting TOR with the North American/European launch? How do you feel about it? Will this news cause you to give up on the game or will you wait until it’s available to you? Do you buy the excuse from BioWare on why they are not releasing it to other regions yet?