While it’s been discussed before, there are new facts in the equation regarding a possible launch delay for SWTOR in Australia and New Zealand. The original source of the most recent rumor? Hex from Good Game.

She tweeted: “Unfortunately we missed out on Star Wars: The Old Republic- but the game’s been delayed for Australia- probs another E3 before release.” 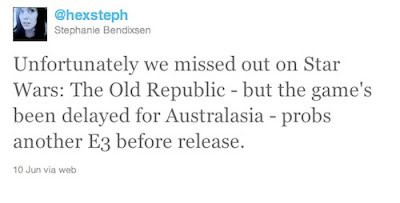 This one simple tweet would cause quite an uproar as fans wanted to know where the information was obtained from and what it meant. Hex later said the info was via their Australian PR agent when her team was trying to get a dev interview. She adds, “Only US and Europe this year I was told” 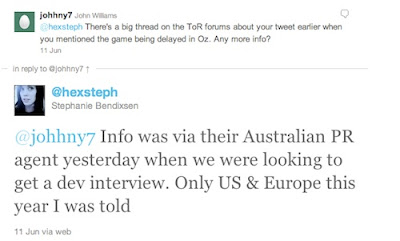 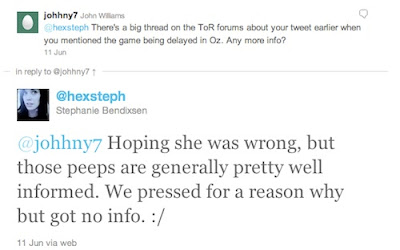 TOROZ contacted David Bass at Bioware to get some clarification on this rumor nad were told the expected- Bioware doesn’t comment on rumors and “launch regions” have not been announced yet.
So with that, there is no real verifiable information. It’s just a rumor. But of course, it’s one that could very well be true.

Jason Wood over at The Age has also mentions the potential delay saying “The bad news is that the Australian release looks like it will be pushed back, but I’ll get more news from EA when they know more.”

It doesn’t seem like good business for BioWare/EA to prevent Oceanic players from enjoying the game. It would create a lot of bad feelings and contempt for the company. A possible scenario is that there will be a delay to the region with access to buy from the US possible. The problem with this is that there will be server lag and other complications from players forced to buy from the US.

Another potential scenario is a delay, but only short one such as by weeks or a couple of months only. This is not preferred but if it happens, it would still be bearable and most people who wanted to play would still purchase the game when it was released.

Finally, what everyone is most likely hoping for is a simultaneous worldwide launch. If it’s at all in BioWare’s ability to do so, I expect this will be the option they will go with. There’s no reason to get players angry before the game even gets to them by giving it to one region over another when you have the capability for a worldwide launch.

When we hear more about this rumor, we’ll be sure to let you know!