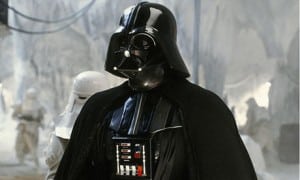 Dave Prowse was a British actor, and any Star Wars nerds who have heard the unedited audio from the original films will know that he also sounded quite British. But you wouldn’t have known it when he donned his Vader mask to become the ultimate movie bad guy.

Prowse played the deadly Sith Lord onscreen for Star Wars (1977), The Empire Strikes Back (1980) and Return of the Jedi (1983) but it seems he was not a bit impressed with the latter movies in the series.

He told the Hull Daily Mail, “I didn’t like Star Wars I, II and III at all. I think the common opinion now is they were really bad movies. There’s no comparison with the original movies. They had a much more believable story.”

Despite disliking the prequels, he did say he was interested in rejoining the cast as a new character in Disney’s forthcoming Episode VII with JJ Abrams directing. This is quite possible since he was never unmasked and no one ever saw his face.

Here’s hoping he, and the rest of us, like the next three movies!