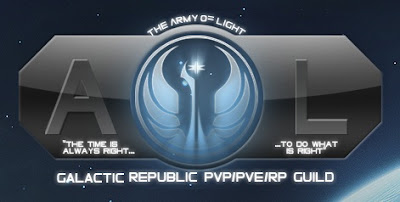 A new week and a new guild. This time Teran from Army of Light took the time to answer a few question about his guild Army of Light . Enjoy!


Where did your guilds name come from?
As I (Teran) understand, the name Army of Light derives straight from the Star Wars lore. The Army of Light was a military branch of the Republic consisting of troopers and many jedi, who not so much rebelled but went against the council’s orders, who wanted to fight. The back story of the guild comes down to jedi joining the Republic’s Army of Light because they refused to follow the Order’s current leader. This is why we chose ‘Army of Light’ as our name.

Can you give me a quick 2-3 sentence description of your guild?
AoL is a well established guild with dedicated and very creative members. We are an ever growing guild that wishes to have fun before and after the launch of SW:ToR. We are always looking for new members to join our ranks

How did your guild come about?
AoL was founded back in February 2010 by Jephos Misipir, Caliber Misipir and Zin Koon. They didn’t like how many guilds were unstructured and were very limited in their interactions between members so they decided to create a guild they’ve always wanted to be a part of.

What kind of play style do you focus on? PvE, PvP, RP:
The Army of Light will focus heavily on Role-playing. However we will do our part to enjoy all aspects of the game including PvP and PvE. We are one of many RP guilds hoping for a RP-PvP server to call home, but if there isn’t one a simple RP server will be ours.

What is your guild set up? How do you run your guild?
My guild is headed by our Grand Master and Supreme Master, Jephos and Caliber Misipir. We have a diverse management system. We have a Social Council, a group of elected people that create event for our guild community to participate in if they wish; whether that be forum Role-Playing activates, some of which last for days or even a couple of weeks, or event held in other games. We have a Recruitment Council, a separate group of elected people who go through applications of potential members and decide if our guild is the right fit for them(99.5% of our applicants are approved and accepted into our guild). And finally we have our High Council, a group of selected senior members to help the guild leaders in managing the guild and its members. We have all these separate councils to try and encourage our members to contribute and be a part of the leadership or management aspects of the guild. Since we try to encourage members to interact with each other we have a private chat room and well as a separate Role-playing chat room for ‘real time’ role playing.

How serious do you play and/or run the guild?
Our guild is run very seriously, as it is a large community of people we need to keep on top of what happens within our guild. However, though the running of the guild is serious, the interaction between members is laid back, mature, and humorous. We don’t mind joking around with each other!

Do you have ranks or a certain hierarchy in your guild?
Yes, we find that as it is such a large guild we do require some form of structural hierarchy. To put it simply we have our Guild Leaders, our High Council, our Company Officers (who each help our leaders supervise 6 platoons), our Platoon Leaders (who help the Company Officers manage the three squads in each platoon and our Squad Leaders (who help our Platoon Leaders manage the four members of their squad). All members are encouraged to take on leadership roles if they think they can handle and desire to be one.

Why do you run a guild?
Well I myself don’t run the guild. But I do try and help out with recruitment videos and such. But the reason Jephos and Caliber run the guild is because they enjoy being able to pull rank and over rule everyone, Jephos’ favourite game is paper scissors rank (he always wins), haha. Seriously though, they and everybody else helping to lead the guild, really enjoy being part of an ever closer community of people that enjoy the same kind of things; gaming, sci-fi, fantasy, music, creative writing, video cutting, graphics designing (Cal’s speciality) as well as just having a good conversation about anything.

How do you approach Raid Planning?
Well we have a number of members (me included) that have raid leading experience from other MMOs which will help us incredibly. AoL will approach raiding from a story and role-playing point of view. This means that we will be fully participating in PvE (and PvP) but we have the desire to do it in character. Though we don’t yet know enough about the raiding game mechanics in place yet, we suspect (or hope) that with our guild structure we will be able to manage raiding well.

Are you always open for new recruits or do you want to keep a certain guild size?
Always, we are always looking for new members. We have recently (within the past two weeks) accepted more than 20 new members. We love receiving new members, as it means more people to RP with, more people to use their creative skills to make their own stories of their characters for us to enjoy and more people to keep our guild strong.

Age Requirement?
Our age requirement is 16. However, if an applicant shows the right level of maturity this may be waved. Though, we are usually quite strict on this.

Guild size?
We currently have 175 members in our guild. Guild cap is 500, so we always want more members!

How do you spend your time until release?
Do you know each other in real life or do you spend a lot of time on forums? We like to spend our time on our forums, or in our chat room talking with one another. As we have people from all around the world and not only the US, I myself am from Australia, this works very well for us. A lot of us like to spend time creating Bio’s, back stories and adventure stories with our characters, whether that be with only our character or in an RP story on our forums with many other members.

What Other Games are you currently playing as a guild?
We have a private Jedi Academy server that we like to RP on. We also play many other online games, perhaps not as an entire guild but a few of us will play together, such as RIFT, World of Warcraft, Eve, Lord of the Rings Online, StarCraft 2, Team Fortress 2 and others.

If somebody is interested now how and where can they apply for membership?
All they need to do is go to our website, click join, and fill out our application form! Easy as that! As we are an RP guild we encourage applicants to expand on their answers as much as possible. If anyone has questions they can send a message to Jephos, Cal, Bren, I or any other member. To sign up go here! www.thearmyoflightswtor.com They can also visit our thread on the SW ToR website http://www.swtor.com/community/showthread.php?t=345099 or even our personal guild wiki! http://thearmyoflight.wikia.com/wiki/The_Army_of_Light_Wiki

Do you have any other information on your guild?
We have 8 recruitment trailers, 4 made by myself and 4 made by Cal you can check them out via links in our SW:ToR thread. Our guild wiki is full of members’ character’s stories, bios and information on the guild itself. Apart from our standard ranking structure our Jedi get to enjoy (if they wish) participating in jedi trials and RP ranks, for RP purposes, such as Padawan, Knight or Master.