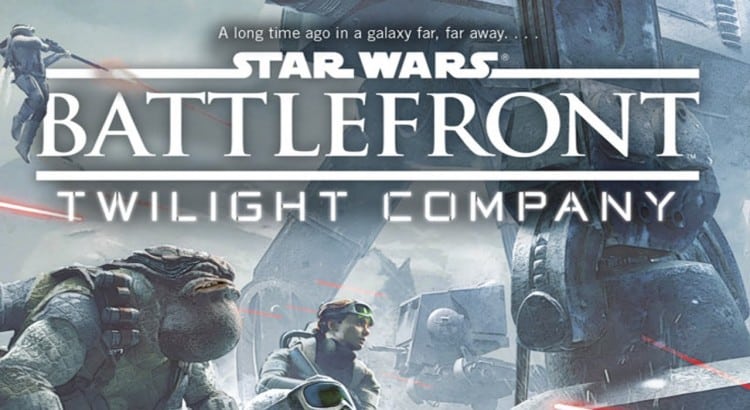 If you’re reading this review, then we are sure that you are impatiently waiting until you are able to play Star Wars: Battlefront on your console or PC. You might also be aware that while Battlefront looks like an online multiplayers dream, the game will not have much of a story.

Instead of going the traditional route where creators weave a classic Star Wars story into an amazing game, Battlefront is happy enough with its multiplayer hook and no original plot or characters to speak of. Well that may not be entirely true, because Battlefront does have an actual story, it’s just actually playable.

In the new book, Star Wars Battlefront: Twilight Company, the author, Alexander Freed, gives life to the war that is happening between the Empire and the Rebellion by focusing on the 61st Mobile Infantry unit, while it battles for freedom against Stormtroopers, Darth Vader, and Star Destroyers.

Currently, there has been a ton of Star Wars books on the market as we get closer to the release The Force Awakens, but Twilight Company is separating itself from the others by showing off one of the less popular sides of the franchise: the military.

During the original trilogy, we obviously get to see the Rebels and the Empire in action, but we hardly ever get a real feel for their tactics and thought processes. With this, Freed portrays the 61st as a mashup of jar heads that have come together with their own rituals and language. The Rebels are on a more uncertain ground that we always witness during the movies, and Freed portrays the entire Alliance with a little bit of desperation. It seems that this Rebellion is running smoothly, instead of it always running out of resources, time, and bodies.

The main action source in the book is where it follows Sergeant Namir, who is a gun for hire who transforms slowly into an Alliance leader while his odyssey unfolds. He has charm and while the story plays out, we eventually see a man who is more invested into the cause then he intentionally lets on.

The one who balances him out is a former Imperial, Everi Chalis, he is now a defector who offers the Rebels important information about the Empire’s resources and their strategies. The unbalanced relationship between Namir and Chalis is what keeps the energy of the story going, right in between large action scenes. However, while Chalis, Namir, and the rest of the Twilight Company receive all of the attention, the Empire doesn’t receive all of its due. There is not an Imperial counterpoint that is as interesting as the 61st, and this seems to make the scenes with the Rebels slow down a bit.

One of the aspects of the Star Wars universe that has been the hardest for novelists to get down is the action scenes. With clear images of Luke in a battle with Vader in a reader’s head, it’s nearly impossible to capture these scenes in the way that the movies do. However, Twilight Company does manage to include a few quite impressive action scenes in the book by writing it out like a military thriller that is set in the Star Wars universe. The way the book describes the ships and the battle maneuvers give the readers a clear picture of exactly what is happening.

We think that Star Wars fans will be mainly interested to know that Freed places Twilight Company smack dab in the middle of the Battle of Hoth during the book’s second part. Twilight Company is on the ground and they are trying to flee the rebel base when Namir witnesses the first AT-AT walker flying down to the ground.

It’s actually quite an interesting twist on the battle, and its perfect synergy because Hoth is also a playable map in the new game. It really should not come as a surprise that the book slows down after the Hoth part, because it’s so well written that everything that happens afterwards just feels like more of a letdown.

While reading about faceless Rebels taking down the Stormtroopers works well, it’s really the unexpected appearance of Darth Vader that could be Freed’s largest accomplishment. You will mainly see Vader through the eyes of Namir, who actually only thought of his as a boogeyman that was made up by Imperial propaganda. However, he eventually comes face to face with him during the battle of Hoth and everything ends up changing.

Star Wars Battlefront: Twilight Company is actually one of the best offerings from Del Ray. Freed gives us the military side of the Star Wars world and does it in a way that nobody has seen before. Also, he gives the readers brand new perspectives on classic characters and moments. Overall, the book is definitely worth reading for any Star Wars fan.