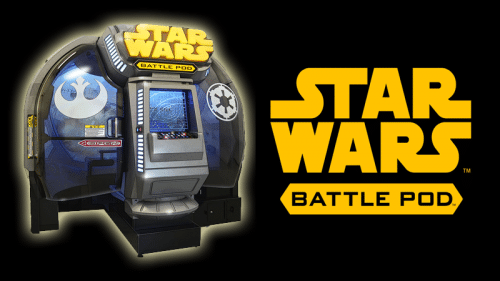 A new Star Wars Battle Pod arcade style game has been released in the US and will be available to ship everywhere by March. This cool throw back style games uses a panoramic cockpit display. Because of this style of display it’s referencing back to Starblade in many ways.

In 2001, Namco decided to make a sequel for the first Starblade. It was one of the first games in the USGF series that used a concave mirror to reflect the game and make a panoramic effect to make it feel real. It also used 3D graphics with polygons and was one of the first of its kind to do so. When Starblade Operation Blue Planet was shown at arcade shows, Namco wanted to make sure they impressed the way the original Starblade did. However, it never released to the public.

The new Star Wars Battle Pod game is using the same theme and style as the Over Reality Booster System that was used for Starblade. The original Starblade would not even be in existence if it wasn’t for the Star Wars influence in the gaming world. Battle Pod is offering many famous encounters from the original films trilogy and a new mission that is called, “Vader’s Revenge.”

Back in 2001, Namco wanted to create a sequel for the original Starblade. This being one of the earliest games in the UGSF series, an on-rails shoot-em-up that used a concave mirror to reflect the game’s monitor and produce a pseudo-panoramic effect to add to the immersion. It was also one of the first Namco games to use 3D graphics with polygons. So when Starblade Operation Blue Planet surfaced at arcade shows, Namco wanted to impress in the same way as the original game had.