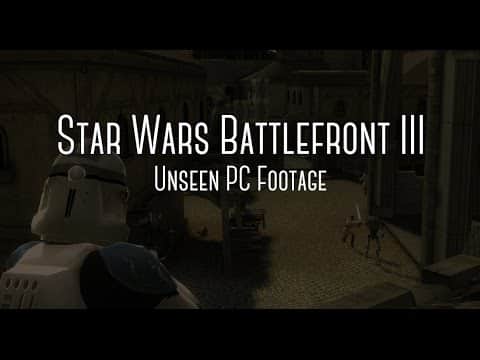 In another case of the Little Game That Never Would Be, Battlefront 3 is one that fans were excited about but that was cancelled back in 2008. It seemed it was never going to take off as a project and didn’t seem to get too far in development, like some other Star Wars games that were announced but cancelled. However, there has been some leaked footage that makes its way out over the years and we see some of that cropping up now and again. It gives you a glimpse into what the game might have been. There were a lot of fans who were disappointed that this game was cancelled. If you’ve never seen this footage before, you should check it out and let us know what you think in the comments.

Gotta clarify that this was recorded in 2008, and no, sadly I do not have a build. If I did it would be out in the public’s hands by now 🙂

It definitely looks like the game had some potential. It had a ways to go from these videos but it definitely looked interesting. Most fans feel like this is a game that could have been a big seller and we’re not 100% certain why it got the ax in favor of other games, some of which got the ax themselves. What do you think?