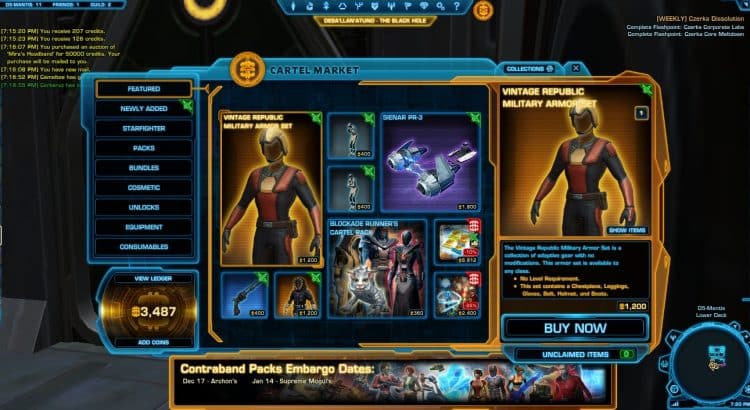 Eric Musco had another update on the official forums today, as he just infomed the community that that all cartel market passes will be bound on legacy from tomorrows patch 4.7.3, and removed with 5.0.

One of the things that we have talked about last week is our new Galactic Command system, only accessible to subscribers at Level 70. Galactic Command will serve as the single point of access for subscribers to earn rewards playing endgame content such as Operations and Warzones. As of the release of the Knights of the Eternal Throne, rewards from this gameplay is gained via Galactic Command, therefore passes are no longer viable. For example, a preferred player with a Weekly Pass: Operations would be able to play an Operation, but would not earn any rewards for doing so. Due to this change, we have removed all Passes from the Cartel Market.

The following passes have been removed:

Additionally, these passes will be converted to Bind on Legacy with Game Update 4.7.3 coming on Tuesday. On November 29th all passes will then be removed from the game when Knights of the Eternal Throne Early Access opens. We are still locking down exactly how we will compensate players who have unused passes as of November 29, and I will have more information to share regarding that next week. We recognize that players are interested in something similar to the Weekly Passes which would offer non-subscribers access to Galactic Command. We are exploring possible options and I will pass on updates as soon as we have them. As always, keep the feedback coming!

Thanks for your support.
-eric

Ok does that mean that in 5.0 pref won’t be able to enter pvp and ops?

Preferred players will fall under the existing restrictions they have now. They can only complete a limited number of Warzone and Flashpoints per week but they cannot access Operations.

In the past, when they changed a BoE item to BoP, it would remain in the guild bank but the first player to take it out would have it bound to him.
To be on the safe side, you’ll probably want to move it to an officer’s bank slot before tomorrow so that the GM/officers have time to decide who is allowed to take out the passes, and you won’t have members accidentally taking out passes with no way to give them back.

This is correct. Once the change has been made, it will bind to whomever takes it out of the Guild Bank.

I may have misspoke. Nothing is changing about how it works from right now, the exception is rewards. Once someone hits level 70, if they are not a subscriber they will not earn any Command Experience Points and therefore no rewards.