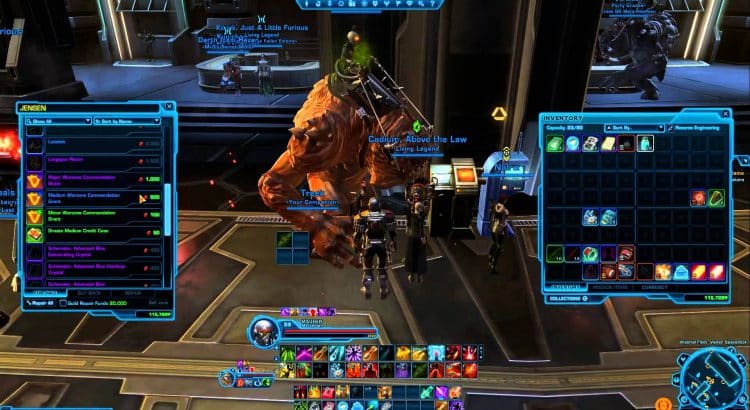 Eric Musco just informed the SWTOR community that Warzone commendations will be bound on pick up from game update 4.7.3 that is coming tomorrow October 25.

I wanted to give you a heads up on a change included with Game Update 4.7.3 on Tuesday. As we discussed last week, we are making changes to how gearing works in our upcoming expansion, Knights of the Eternal Throne. In support of our new Galactic Command system, we will be removing Warzone Commendations from the game on November 29th when Knights of the Eternal Throne Early Access opens. As a result, any new Warzone Commendation Grants will become bound and will Bind on Pickup starting on Tuesday, with Game Update 4.7.3.

It is our intent that Warzone Commendations will convert to credits (as will Crystals) with Eternal Throne’s launch. We are still working out the conversion rates and I am hopeful that I will have that information for you later next week. To reiterate, in preparation for Knights of the Eternal Throne all Warzone Commendation Grants will become bind on pickup as of Game Update 4.7.3 on Tuesday.

What about ranked season 6 comms? Weren’t those supposed to be converted to Warzone Comms at the start of Season 8?

Season 6 Commendations will also convert to credits as they would have become WZ Comms, which are also becoming credits.

Are the crystal vendors, like those on the fleet that take commons for mods, going to remain and accept credits now?

Correct, they are going to remain in place and accept credits.

I really hope this won’t mean you are going to remove the PVP weapons vendors from the fleets in 5.0. Those vendors sell some weapons you cannot get elsewhere anymore in moddable form.

This is the plan currently… All of the purely cosmetic items you can buy for PvP Commendations will still be in the game but purchasable for the prior Ranked Season tokens. We chose to do this over credits so that these cosmetic items would remain for PvPers. The Warzone consumables will now be purchasable for credits. The PvP tier gear and their vendors will be removed from the game with 5.0.

Hope that answers your question!

…are you for real? You want to remove the vendors that sell moddable sabers and blasters instead of converting them to be purchasable by credits? I am not about the regular PVP vendors that sell PVP gear. I am not talking about the ranked season vendors. I am talking about the weapons vendors standing next to the PVP terminals that sell moddable weapons without stats for 900 WZ commendations. Some of these weapon models are no longer available as moddable in this game, besides these vendors.

Sorry, my post may have been unclear. The items you are describing, the moddable sabers and blasters, are cosmetic items. Therefore they are remaining in the game and can be purchased still after 5.0 for prior Season Ranked Tokens (S7 in this case).

Please let us know what happens to those grants that are currently in Legacy Banks.

After tomorrow, they will bind to the character that removes them. I am not sure at this moment what will happen to them with 5.0, but I will get you that answer.