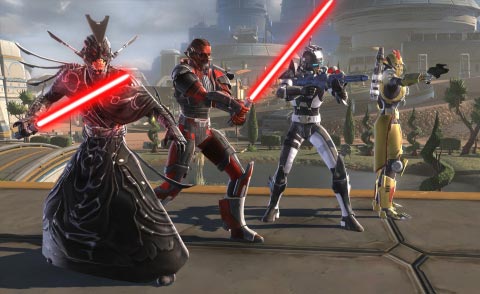 BioWare is making some some big gear changes to Star Wars: The old Republic with the launch of the next expansion:

Hey folks,
One of the things we talked a bit about on the stream is that there are gearing changes happening with Knights of the Eternal Throne. This thread is meant to give you a few more details on some of the things that will be happening in KOTET, along with being a place that I can address questions or concerns you have with these changes. First, here are the details on how gearing will work at level 70:

That should cover most of the basic changes coming to itemization in KOTET. I know this is a lot to take in, so please ask any questions you may have in this thread and I will work to answer what I can!

As we talked about a bit on the stream, there are some gearing changes happening with Knights of the Eternal Throne. The purpose of this thread is to go over how these changes will impact PvE and PvP gearing. Here are some more of those details:

That covers an overview of how the changes will impact PvP and PvE gear in Eternal Throne. Please let me know of any questions you may have and I will work with the team to get you answers.

Priority Ops will no longer exist. They are sort of replaced in that Operations can be the daily bonus, which will award bonus CXP for doing them.

Is there a cap to command rank? As in, for example, you reach “level 100 command rank” and you can progress no further?
EDIT: Also, will any of this affect gearing prior to level 70?

There is a cap. When you hit the cap you continue to earn CXP and fill your bar so that you “level.” When this happens and you are at the cap you will get a Command Crate but not level up.

No effect below level 70.

3 questions
1. Just to clarify, you only have to hit level 70 to access command ranks, and not complete KOTET story, correct?
2. Is there a max level for command ranks?
3. Once we hit that level, will there be any other way to obtain rewards that we didn’t get?
Thanks

also, what happens to all current commendations? do they turn into points or just rendered worthless?

Current Commendations will be going away, we will have more details in the coming weeks on their conversion.

First of, are these random drops, that is to say that if I’m extremely unlucky I can’t get the best earpiece for my char at all?
Secondly, are you saying that if a player grinds H2’s for long enough he can get Nightmare gear?

Since bosses will no longer drop gear in operations will there be lock outs on the operations?

Yup, lockouts will still remain in place. Although they don’t directly drop gear they will still drop their other cosmetic rewards and will be one of the best sources of Command Experience Points.

Balancing will be the key. If doing Opses rewards, say, 4x the Galactic Points than anything else thus effectively dumps way more crates on you faster, then it will still be totally worth to do Ops and gear the fastest this way.

Bonus aside, it is the goal that fastest way to earn CXP will be through the hardest difficulty Operations and Uprisings, along with Ranked Arenas.

So how are F2P/Preferred players supposed to get OP-worthy gear after KotET launches?

F2P and Preferred players will be unable to earn end-game gear since they will not have access to Galactic Command (GC). If they were a subscriber who went preferred and had earned gear through GC we won’t take it away, but they will be unable to earn additional gear (through Command Ranks) until they subscribe. They can still get gear through Crafting, that is unchanged.

How can you do the hardest difficulties without having gear first? This seems contradictory to me. Surely you first need a decent set of gear before you can touch NiM?

Fair point, but that isn’t too dissimilar to how it works now. If you are someone who loves Operations, as an example. You may start in Story Operations to get your Command Rank up and gear up until your character is ready to move into Master (Nightmare).

In general the rule for CXP is that the more players that participate in content, and the harder that content is, the faster you earn it. Although it isn’t as fast a Master Operation, doing a Story Operation is still worth more CXP then doing Heroics would be.