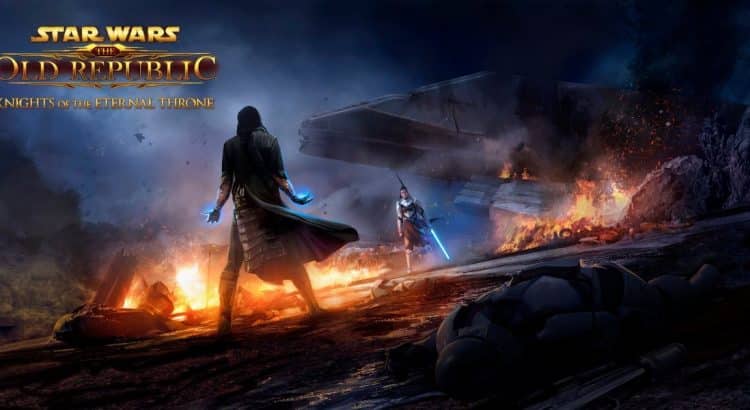 We have been down for a few days due to new server host, but this is a story we don’t want you to miss out on. The next SWTOR expansion will be named Knights of the Eternal Throne (KotET) and is coming in Fall 2016.

Today, during an EA Star Wars™ “Meet the Makers” panel at Star Wars Celebration in London, James Ohlen, Director of Design for BioWare helped celebrate the game’s upcoming 5-year anniversary, revealing a brand new digital expansion coming this fall, Knights of the Eternal Throne. The all new expansion adds more of BioWare’s trademark cinematic storytelling, as well as exciting new game features in one of the largest updates the team has made since the game launched 5 years ago in 2011!

BioWare also announced that beginning today, all players can prepare for the new expansion by playing Chapter 1 of the prequel story in Knights of the Fallen Empire, now for free:www.swtor.com/fallen-empire/free-trial.

Finally, the team released an infographic, compiling some of the community’s most impressive feats over the last five years as well as a new 5-year Celebration trailer here: www.swtor.com/swtor5.

Stay tuned for more details about Knights of the Eternal Throne: www.swtor.com/eternal-throne.

EA announced the next expansion pack for Star Wars: The Old Republic Saturday evening atStar Wars Celebration Europe. During the EA Games panel at the convention in London, England, Knights of the Eternal Throne was announced, a major expansion for the game here in its fifth anniversary year.

Eternal Throne is a direct sequel to the current expansion, Knights of the Fallen Empire,which brought the deep solo gameplay and BioWare’s signature storytelling to the game in a significant way. While it will be playable on its own (you don’t have to play “Fallen Empire” to do so), anyone who purchases Eternal Throne will have access to Fallen Empire, and game director James Ohlen highly recommends fans do, just to fully experience the story. He was excited to make the announcement at Celebration.

“It was really important to make the announcement here. Celebration is, for fans, the biggestStar Wars event of the year outside of the release of a movie. Knights of the Fallen Empirewas last year – it’s been a long time since we’ve talked about the next thing,” Ohlen told Comicbook.com in an interview about the expansion.

While the full announcement of the expansion, which will include some major details (and spoilers to Fallen Empire) will come later, they wanted to tease it at this event, to let fans know something new was coming around the end of this year.

“It has some of the same characters, a lot of new characters,” Ohlen promised. He also said they learned a lot from Fallen Empire, and are using that to inform Eternal Throne. “We’re making the story more epic, and choices more impactful than we have in the past.”

Of course, The Old Republic is still an MMO, and Ohlen said there will be “a lot of great co-op and multiplayer challenges” included in Eternal Throne. The story focus is there, similar to Fallen Empire, but they redoubled their efforts to make the expansion attractive for their loyal subscriber base as well.

Ohlen realizes that there were things that “worked and hadn’t worked” in The Old Republic, and that’s where the focus on these new “Knights” expansions turned back to making you feel like you’re the hero going through the journey.

“The old Knights of the Old Republic games were so popular because they made you into the ‘Luke Skywalker’ of the game, giving you a band of friends you’d love to go on a galactic adventure with in real life,” Ohlen acknowledged. “We want to continue that with Knights of the Fallen Empire and Knights of the Eternal Throne, giving you that feeling and the story twists.” And yes, they’ve been using the word “Knights” in the title of these expansions on purpose, Ohlen admitted with a chuckle.

“It’s a brand new, epic story, with some exciting co-op content to it,” Ohlen said in summary. The final chapter of Fallen Empire hits in a couple of weeks, and you can play the full sixteen-chapter game expansion start to finish then. “It really feels like the spiritual successor to the Knights of the Old Republic series.” Fans who want to give it a try can try the first chapter of Fallen Empire for free, as well.

Knights of the Eternal Throne will ship as an expansion for The Old Republic by the end of Fall 2016.